The third annual German Stevie Awards were celebrated at the Fairmont Hotel Vier Jahreszeiten in Hamburg on Friday, March 31. President and Founder of the Stevie Awards, Michael Gallagher, handed out the gold, silver and bronze Stevie Awards to winners from across Germany. Highly-ranking representatives from more than 50 winners received their awards on stage. 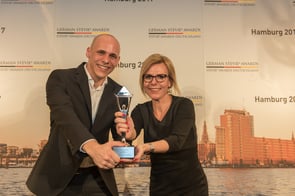 In their third year, the German Stevie Awards have already established a leading role in Germany. They are part of the Stevie Awards programs, which are widely considered to be the world's premier business awards, conferring recognition for achievement in the workplace in programs such as The International Business Awards for more than a decade.  All organizations in Germany were eligible to submit nominations.

Winners were selected in variety award categories, ranging from best companies of the year to best customer service and HR solutions, to new products and marketing campaigns. There were many categories for creative minds such as best videos, company-related e-books, and apps or websites. "The quality of the nominations this year was just outstanding," said Michael Gallagher. He was delighted to meet many of the winners in Hamburg at the awards gala.