The Stevie® Awards, organizer of The American Business Awards, announced today that the final entry deadline for the 15th annual ABA competition has been extended to April 7. No additional late fees will be charged.  Entries submitted through April 7 will not be penalized in any way in the judging process. 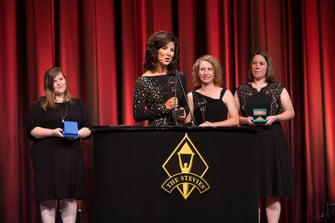 “We’ve received so many requests for individual deadline extensions that we’ve decided to extend the deadline for everyone,” said Stevie Awards president Michael Gallagher. The original final deadline was March 15.

GET THE ENTRY KIT HERE.

The American Business Awards are widely considered to be the premier business awards program in the U.S.A. All organizations operating in the U.S.A. are eligible to submit nominations -- public and private, for-profit and non-profit, large and small.  The 2017 awards will honor achievements since the beginning of 2016.  Entry details are available at http://www.StevieAwards.com/ABA.

Close to 150 executives worldwide will determine the Gold, Silver and Bronze Stevie Award winners.  The judging process has begun.

Gold, Silver and Bronze Stevie winners will be announced on May 1, and the awards presented at a gala banquet on June 20 at the Marriott Marquis Hotel in New York City. Attendance is not required to win.

The list of past Stevie Award winners in The American Business Awards reads like a who’s who of innovation and business success in the U.S.A.  Explore the lists of past Stevie winners here.