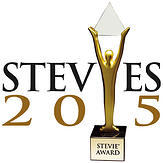 “We’ve received so many requests for individual deadline extensions that we’ve decided to extend the deadline for everyone,” said Stevie Awards president Michael Gallagher. The original final deadline was April 22.

No additional late fees will be charged for entries submitted through May 1, and late entries will not be penalized in any way in the judging process.

All organizations operating in the U.S.A. are eligible to submit nominations -- public and private, for-profit and non-profit, large and small.  The 2015 awards will honor achievements since the beginning of 2014.  Entry details are available at http://www.StevieAwards.com/ABA.

The New Product & Service categories have been greatly expanded for 2015, with entirely new sets of categories to recognize Content- and Education-related products and services.

Stevie Award winners will be selected through two stages of judging by more than 200 professionals worldwide. Finalists will be announced on May 7, and the awards presented at two gala events: on June 22 at the Fairmont Hotel in Chicago, and on September 11 at San Francisco’s Julia Morgan Ballroom. Stevie Awards will be conferred at three levels of distinction: Gold, Silver and Bronze. Several Grand Stevie Awards also will be conferred as best-of-competition prizes. Stevie Award trophies are among the world's most coveted prizes.