American Business Awards to Be Broadcast Live on June 20

The Stevie® Awards will present The 14th Annual American Business Awards, the top business awards program in the U.S.A., on Monday, June 20 at 7:00 pm ET at the Marriott Marquis Hotel in New York City.   The presentations will be broadcast live via Livestream. 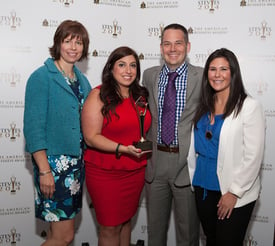 Close to 500 executives from across America will attend the June 20 presentations. More than 3,400 nominations were reviewed in The American Business Awards (ABA) judging process this year by more than 250 professionals, whose average scores determined the winners in categories such as Executive of the Year, Woman of the Year, Startup of the Year, and many more.

Monday's event will feature a silent auction to benefit CARE.  CARE fights poverty for all by focusing on girls and women with programs that bring lasting change to whole communities

For a complete list of the Stevie Award winners, visit www.StevieAwards.com/ABA.