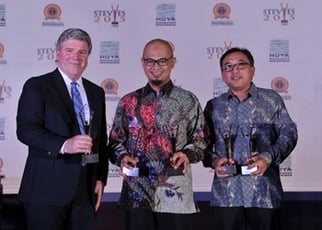 Gold, Silver and Bronze Stevie Award winners in the various categories were announced on 19 April. Those awards were determined by the average scores of more than 50 executives worldwide earlier this year.

All awards will be presented to winners during a gala event at the Hilton Hotel in Tokyo, Japan on Friday, June 2. Tickets for the event are now on sale.

“We are very pleased with the results of the 2017 Asia-Pacific Stevie Awards, with the growth in the number of entries and the depth and breadth of the stories of business innovation that we received,” said Michael Gallagher, president and founder of the Stevie Awards. “We are very much looking forward to greeting and celebrating this year’s winners in Tokyo on June 2.”

* Sponsors and partners of the 2017 Asia-Pacific Stevie Awards include PR Newswire Asia, the official news distribution partner of the awards, and the Korea Business Communicators Association.

Online marketing moves at the speed of light. Customers, prospects and partners can be the lifeblood of a business, which is a sentiment that TopSpot Internet Marketing has set their sights on to differentiate themselves from other search marketing firms. As they become one of the fastest growing firms in Houston, Texas, their focus on accountability, transparency, collaboration, education and delivering meaningful results helped them win the Interactive Agency of the Year Award in The 2016 American Business Awards.

Winners in The 2017 American Business Awards were recently announced. Interested in submitting nominations for 2018? Request your entry kit here. 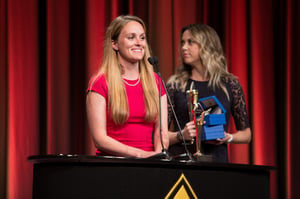 “Winning multiple awards for our work on websites we’ve designed and developed and then going on to win the Grand Stevie Award for Interactive Agency of the Year further solidified the fact that our efforts are meeting and exceeding industry standards in addition to driving leads for our clients.”

At TopSpot, their focal point is delivering meaningful results for their clients.

“Our culture is built around a quality-focused approach, both in our work & our customer service. Our team takes tremendous pride in having a positive impact on our clients' businesses.”

Big Changes for 2017 and Beyond

TopSpot expects to see many changes in their industry. As mobile search continues to increase and with Google’s announcement of the mobile first index, more websites built and optimized for mobile devices will take precedence.

“We are also seeing a rise in voice search because of devices like Amazon Echo and Google Home. This is something we must take into consideration more and more when optimizing websites, making sure they are optimized for conversational searches.”

They also anticipate a greater importance on user experience with, “continued site speed monitoring, getting page load times down on all sites, which contributes to both user experience and organic rankings.”

Director of SEO, John Varghese highlights a story about a client’s thankfulness that shouldn’t be overlooked, even when everything runs smoothly.

“He spoke to the entire company with a lot of thankfulness and communicated to us that we do more than just build websites, develop paid search campaigns or SEO, and that we helped him, his family, his employees and his employees families build their dreams. He went on to say that he was able to spend more time with his family and the charitable work he is involved in, employ more people, give raises, that his employees were able to send their kids to college, sometimes for the first time in their family history.” He said that, “Since that time we have an internal standard of asking if we are building dreams for our clients.”

The Stevie® Awards today announced the Grand Stevie Award winners in The 15th Annual American Business Awards, the top business awards program in the USA. Winners will be presented their Grand Stevie trophies at the ABA gala event on June 20 in New York. 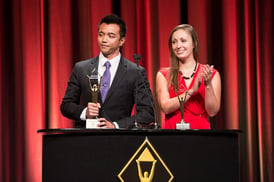 The Grand Stevie Award trophies are best-of-competition prizes that are awarded to the organizations that submit the best body of nominations to the competition, in their own name or in the names of one or more clients.

Winners are determined by a points system based on the total number of awards won in the ABAs, with a Gold Stevie win counting for three points, a Silver Stevie for two points, and a Bronze Stevie counting for one-and-a-half.  Gold, Silver and Bronze Stevie winners in the 2017 ABAs were announced on May 2.

CallidusCloud, the Dublin, CA software developer has received the Grand Stevie for Organization of the Year for the second year in a row, with a record 111.5 points. Stevie-winning organizations are accorded three points for each Gold Stevie win, two points per Silver Stevie win, and one-and-a-half points for each Bronze Stevie win.

Other Grand Stevie winners include:

Grand Stevies will also be presented to the 10 other organizations with the most points in the 2017 competition. They are:

All organizations operating in the U.S.A. – large and small, public and private, for-profit and non-profit - are eligible to submit nominations to the ABAs in a wide range of categories, honoring achievement in every aspect of work life, from customer service and management to public relations and product development. More than 3,600 nominations were reviewed in the judging process this year by more than 190 professionals, whose average scores determined the winners. The presentations will be broadcast live via Livestream.

For a complete list of the 2017 Stevie Award winners, visit www.StevieAwards.com/ABA.

Tickets for the June 20 awards gala in New York are now on sale.

All organizations operating in the U.S.A. – large and small, public and private, for-profit and non-profit - are eligible to submit nominations to the ABAs in a wide range
of categories, honoring achievement in every aspect of work life, from customer service and management to public relations and product development. More than 3,600 nominations were reviewed in the judging process this year by more than 190 professionals, whose average scores determined the winners.

2017 Stevie winners will be celebrated and presented their awards during a gala event on Tuesday, June 20, at the Marriott Marquis Hotel in New York. Tickets are now on sale. The presentations will be broadcast live via Livestream.

CallidusCloud (Dublin, CA) and Cisco Systems (San Jose, CA) are the leaders among Stevie Award winners, with wins in a wide range of categories, including 14 Gold Stevies. CallidusCloud and Cisco Systems are sure to be among the winners of the Grand Stevie Award trophies, the top overall winners in this year’s ABAs, who will be announced next week.

Every new product or service nominated in The 2017 American Business Awards is included in voting for the People's Choice Stevie Awards for Favorite New Products, a worldwide public vote. Voting is now open at http://peopleschoice.stevieawards.com and will conclude on June 2. People’s Choice Stevie winners will be announced the week of June 5, and will be honored during the June 20 presentations.

“Entries to the ABAs grew substantially this year in both quantity and quality.  We thank the judges for their time and interest in determining the winners, and we look forward to celebrating the winners during our gala event in New York on June 20,” said Michael Gallagher, founder and president of the Stevie Awards.