Behind every large commercial property, whether it is a university campus or a shopping mall, are countless moving parts that have to work in harmony. Throw off one of those parts, and you can create major headaches for employees and customers.

When it established its Customer Care Center (CCC) in 2015, Stevie-winner Grosvenor Services tried to ensure that issues would not occur for any of its commercial clients. By centralizing its customer support function, the facility services firm has been able to reduce complaints and resolve issues as quickly as possible.

The Dublin, Ireland-based company, which provides a range of services, including cleaning, security, mechanical, and electrical, built the center to follow through on its customer-first ethos. Employees in the center review processes and systems to eliminate potential conflicts and address client needs in an effective, timely manner.

“Clients require so much more from their supplier partners, and we must continue to deliver beyond the services we provide at the front line,” says Marianne Lambert, a business unit manager who oversees the CCC. 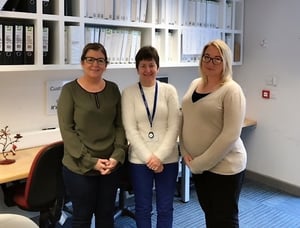 The center is an extension of Grosvenor’s core values, summed up in the acronym “PROACT”—Pursuit of Excellence, Reliability, Openness, Accountability, Customer Focus, and Teamwork. It has proven to be a sound business decision, with the company subsequently winning a number of bids based on its commitment to customer service.

The initiative has paid off in other ways too. The company became a finalist for multiple local awards and in February earned a Bronze Stevie® Award for Front-Line Customer Service Team of the Year in the 2018 Stevie Awards for Sales & Customer Service.

“When our CCC was initially formed, we began researching achievements and accreditations as a method of improvement and benchmarking,” says Lambert. “In doing so, I came across the Stevie Awards and immediately I felt this was extremely relevant and worth pursuing.”

The honor naturally brings a sense of considerable pride. “This is a huge personal achievement as the manager of the CCC,” Lambert says. “I really believe in what I do and this award acknowledges the work and commitment that has been invested so far.”

Founded in 1959, Grosvenor Services now serves clients throughout Ireland, the United Kingdom, and the United States of America, and employs more than 4,500 people. In addition to its core facility management services, the corporation has expanded to offer everything from reception and mailroom support to landscaping and pest control.

One constant throughout Grosvenor Services’ history is a focus on the needs of the customer. This family business has tried to distinguish itself from competitors by making clients feel like they are dealing with a much smaller organization.

The CCC has certainly helped them accomplish that goal, and now they have a Stevie Award to show for their efforts.

“This is a huge achievement and an honor for our business and our team especially,” says Lambert. “We have worked extremely hard to instill and embed our culture of customer focus and this award is an acknowledgement of all the hard work and dedication that has been committed to doing so.” 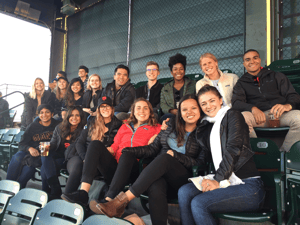 Founded in October 2013, Collective Health is backed by NEA, Founders Fund, Google Ventures, and other leading investors. Erika Alperin is the Corporate Marketing and Internal Communications Manager at Collective Health.

“We’re focused on serving the 170M+ Americans who receive healthcare coverage from their employers,” says Alperin. “We are interested in the shift to recognizing that the member experience really matters when it comes to healthcare. When people get the help they need to understand their health benefits, they are better, happier, and healthier consumers of healthcare.”

They replace traditional health plans with a flexible, data-driven alternative that enables companies to get more out of their investment while taking better care of their people.

Collective Health has become a popular choice for organizations to review their increasing costs year over year, and how to improve long-lasting effects of profits and employee spending not running as efficiently as possible.

An Effortless Experience for Everyone

Collective Health is powered by an all-in-one solution that connects and administers the entire health benefits ecosystem: health plans, benefits programs, spending accounts, and employee support. Their technology delivers a more effortless experience for everyone.

This has led them to achieving an NPS (Net Promoter Score) score that is 10 times greater than the industry average, which is due in large part to their amazing Member Advocate team. Alperin explains why their team has played a pivotal role.

“A few of our MA's joined the role because they have had to navigate health insurance and coverage issues for some of their family members. Not only were they trying to understand their plans, they were translating their coverage to family members from English to Spanish. Upon joining Collective, they helped to start a group on our team to serve our Spanish members and translate complex plan documents.”

Collective Health has also been recognized by The Wall Street Journal Top 25 Tech Companies to Watch, 2017, and Rock Health's Best Digital Health Company to Work For, 2017.

“We offer a rigorous training program, both content and cultural, work with internally built tools and technology that streamline processes, and allow us to focus on doing our job,” Alperin says.

Hiring advocates with a passion for helping others and solving complex issues can provide an important sense of empathy to customers.

Brainier Solutions, Inc. is definitely making an impression in the tech world, both with their foundational Learning Management Systems (LMS) and their customer service. Consistent care has earned them the 2017 Bronze Stevie® Award for Customer Service Department of the Year. This is their third year winning a Stevie Award for Sales & Customer Service.

Brainier was founded in 1995 in Minneapolis, Minnesota in the United States with a mission to aid clients in continuing education and training, advancing skillsets, and expanding knowledge. They offer three different computer software packages: élan LMS, Chameleon 2.0 (developed by BI WORLDWIDE), and Legacy LMS.

Brainier Solutions serves small to large enterprises dedicated to training and investing in their staff. Their software packages offer an interactive, individualized learning portal accessible to employees at any time and on any digital device they choose.

They state, “Brainier programs are developed with the understanding that employees are not machines,” the company states. “They are people balancing needs, concerns, and interests in and out of the workplace. As such, we aspire to provide a curriculum that develops work-related skillsets and personal development attributes that promote success in every aspect of their life.”


The LMS offers access to courses in Drug and Alcohol Awareness, HIPAA, IT Skills, Legal Compliance, OSHA, PC Skills, SkillSoft, as well as access to other course libraries. Employees can study at their own pace in ways they can comprehend and succeed. LMS is sure to include blended learning options with interactive e-learning and multimedia resources. Success is measured by each individual’s testing and tracking.

Employers and their administrators can manage and coordinate trainings as well as keep track of each employee’s development and success. The LMS programs also offer internal social communication via blogs, file exchange, internal messaging, and live chat.

They are repeatedly recognized for their product and services by tech guru sites like TrainingIndustry.com and SoftwareInsider.com. TrainingIndustry.com cited Brainier Solutions as one of The Top 20 companies in 2017 for Learning Portals/LMS after several years of featuring them as a company to watch. SoftwareInsider.com assessed them as “Above Average” in almost every category. The Brandon Hall Group has awarded Brainier Solutions for Excellence in Technology for Learning Management and Unique Learning Technology every year since 2013.

Brainier Solutions’ excellent product and award-winning customer service mirrors the motivation behind their LMS systems. “To advance, you must inspire and invest in their [employee] development. In-house training not only motivates employees to improve, it also gives them the tools and knowledge to do so.”
0 Comments Click here to read/write comments

The Stevie® Awards for Great Employers Issues Call for Entries

The Stevie Awards has issued the call for entries for the third annual Stevie Awards for Great Employers, which honor the world’s best companies to work for and the human resources teams, professionals, suppliers, and new products and services that help to create and drive great places to work.

All individuals and organizations worldwide—public and private, for-profit, and non-profit, large and small—may submit nominations to the Stevie Awards for Great Employers. The early-bird entry deadline, with reduced entry fees, is May 2. The final entry deadline is June 6, but late entries will be accepted through July 18 with payment of a late fee. Entry details are available at www.StevieAwards.com/HR. 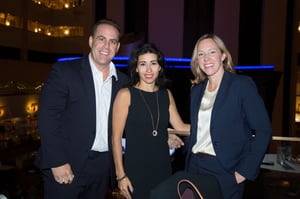 Winners in the 35 industry-specific Employer of the Year categories will be determined by a unique blend of public votes and professional ratings. Public voting will take place from July 23–August 12.

Focus on Customer Service Pays off for Travelzoo

With competition from more than 2,300 organizations, winning a Stevie in the 2018 Stevie® Awards for Sales and Customer Service is no easy feat.

“Winning has rallied our colleagues around the world to re-double our commitment to deliver ‘100% happiness, 100% of the time,’” says Lisa Oswald, Travelzoo’s Senior Vice President of Global Customer Service. “We know everyone's job is all about doing what's best for our members—from the travel partners we choose to work with, to the destinations we curate and the rigor of our quality vetting process—we are

proud to stand behind our brand.”

This is not the first time Travelzoo has come away with special honors from the Stevie Awards. Last year, the site garnered a Bronze Stevie for its use of contact center technology and a Gold award in the Women in Business Awards. Oswald also won a Gold Stevie in 2013 for Customer Service Executive of the Year.

Even so, Oswald contends that pulling in several customer service awards at the February 23 ceremony in Las Vegas was particularly gratifying. “A win for the service team has infused an even greater sense of pride and enthusiasm for our members-first philosophy,” she says.

Listening to the Customer

The company provides 28 million members with insider deals and one-of-a-kind experiences that have been reviewed by its experts.

Part of the company’s growth stems from a resurgence in the leisure travel sector. Americans spent more than $100 billion on summer vacations alone in 2017, according to a report by Allianz Travel Insurance. In 2016, spending was just shy of $90 billion.

“Research shows that experiences make you happier and are as valuable, or more valuable, than buying fancy things. It’s changing the way people travel across all generations and has given rise to the sharing economy,” says Oswald. “Consumer spending is expected to grow in ‘non-essential’ categories, including vacations and dining out, and we are poised to meet that growing need for experiences—that’s what we do.”

Even in a healthy industry, Travelzoo’s unwavering commitment to customer service has helped it stand out. Its philosophy, says Oswald, is one of continuous improvement, where the department strives to fine-tune every aspect of the customer experience.

The Voice of the Customer program is critical and elicits feedback from people who use its travel deals. The program has helped Travelzoo raise its CSAT score, a key measure of customer satisfaction, from the low 80s to the low 90s in a short period of time, Oswald continued.

“We don't have an army of people, and we don't have an unlimited budget. However, we do have a relentless focus on making incremental changes that matter to our members,” Oswald explains. “And the cumulative impact of these changes over time—changes in product, changes in process, and changes in policy—is that our members have endorsed our service at all-time record highs. I call that the ‘Thank You Effect.’”