The Receivables Exchange of New Orleans, Louisiana USA won a Stevie Award for Management Team of the Year in the management awards categories of The 2011 American Business Awards. The ABAs are open to all organizations in the U.S.A.  The 2012 edition opens for entries in October. 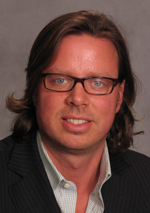 The Receivables Exchange, founded in 2007 by Nicolas (Nic) Perkin and Justin Brownhill, allows businesses to sell their receivables to a global network of institutional investors and access working capital in as little as three days. With remittance terms now as much as 180 days, The Receivables Exchange is a welcome financial tool for small and mid-sized businesses, particularly in the current economic climate.

Working in the Dark

Although the concept for The Receivables Exchange seemed straightforward, there was no blueprint for making the Exchange work. The closest model, the New York Stock Exchange, had nearly 200 years to get everything right. Even building a team was difficult, since Justin Brownhill and Nic Perkin needed to find specific talent for a

According to its two founders, building the company was like walking through a dark, windowless room: they had no reference points, and could not see the walls. There were moments when it seemed that the Exchange would not come to fruition, but Justin and Nic persevered.

Nic’s idea for The Receivables Exchange was to provide growing companies with business financing. His experience in starting and growing companies led him to conceptualize new and faster means of getting working capital. Where Nic envisioned the idea of modernizing accounts receivable, Justin conceptualized the market model: standardization, transparency, centralization, and competition. Justin drew from his years of experience in exchange strategy and trading technology to structure a marketplace where accounts receivable could be funded and traded like other assets on an electronic platform.

The result is a real-time, online, competitive marketplace for accounts receivable that gives companies the ability to generate cash quickly and as competitively as possible.  The normal turn on a transaction is approximately 1 day at a 1 percent cost of capital.

“The ‘Management Team of the Year’ award is a testament to the ongoing commitment, innovation, and hard work of our entire Receivables Exchange team,” said Justin and Nic. “Recognition from the nation’s premier business awards program affirms the tremendous value our employees are contributing to make The Receivables Exchange the truly innovative working capital marketplace it has become.”

A Challenge to the Old Guard

Because the Exchange was pioneering a working capital solution for small and
medium-sized businesses, the old guard saw them as a threat. Some of the factoring industry associations blackballed The Receivables Exchange from working with many of its members, whom the Exchange had counted on to be among their clients.

Needing the half of the equation that would buy receivables, Justin and Nic found an entirely new and unconventional set of institutional buyers. Because these buyers had never purchased receivables before, the Exchange needed to take the extra step of educating them on the value of receivables and how it would benefit them.

Since the early days of struggle, the Exchange has grown its business to now
have the best of Wall Street investors. Fortune 100 companies were so impressed with The Receivables Exchange that they the requested that the Exchange set up the Commercial Receivables Paper Market for their receivables. Although these larger cash-rich companies have access to other means of liquidity, they came to the Exchange as they recognized the value in an online receivables marketplace with a diverse pool of investors.

Participation by these corporations is validation that the Exchange is changing the landscape of business financing, and it has quickly become a mainstream cash management tool for companies of all sizes.

The Receivables Exchange saw 466% growth in 2010. This nearly five-fold rise indicates that businesses are embracing the Exchange’s online marketplace as a method of managing cash flow and are taking advantage of this unique opportunity.  Quite an accomplishment for a market built from scratch only a few years ago.

The Receivables Exchange LLC is a subsidiary of the New Orleans Exchange (NOE).

CEO & co-founder Justin Brownhill’s entrepreneurial spirit was instilled at a young age at his father’s knee. On Wall Street, Justin was one of the youngest, most successful bankers at Salomon Brothers, UBS, and DLJ, where he worked on over $100 billion in M&A transactions and some of the industry’s largest underwritings.

Brownhill earned a Bachelor of Commerce with distinction from the Faculty of
Management at the University of Calgary, Canada. In 1994 he helped start Minds Matter, a NYC-based volunteer organization, which helps disadvantaged inner-city high school students prepare and get selected for higher education
opportunities.

At the age of 15, president & co-founder Nic Perkin cleared $500 per week walking dogs. He bought stocks with the money to help to pay for college and went on to receive a Master of Science in Finance from the London Business School and a Bachelor of Arts from Tulane University.

As head of Global Business Development of Massive, Inc., a provider of software and services, he spearheaded the company’s North American strategic initiatives to host advertisements within video games. In 2010, Nic was nominated to serve as the Vice Chairman of the Louisiana Innovation Council, which was ratified unanimously by the Louisiana State Legislature and approved by Governor Bobby Jindal.

About The Receivables Exchange

The Receivables Exchange is a first-to-market, real-time, online marketplace for working capital financing that provides a game-changing solution for both small and large U.S. companies. The Exchange connects a global network of accredited Buyers to businesses (Sellers) in search of flexible, affordable, and continuous access to working capital. Buyers get direct access to a $17 trillion new investable asset that comprises the largest asset class in the U.S. credit markets. Sellers gain prompt and highly cost-effective access to the capital they need, without onerous constraints.