American Express OPEN, the NFL, and P&G Among Winners of Gold Stevie® Awards;New Product and Tech-related Winners to Be Announced at Second Event
in San Francisco on September 16 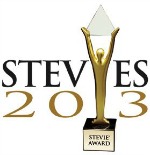 For the first time, The American Business Awards’ June banquet was held outside of New York City.  Last night’s ceremony took place at the Fairmont Chicago Millennium Park Hotel and honored winners in categories such as customer service, human resources, corporate communications, live events, publications, and selected categories for company/organization, management and marketing.  Winners in all new product and technology-related categories will be announced at an event in San Francisco on September 16.

­   Most Innovative Company of the Year: Procter & Gamble

­   Communications or PR Campaign of the Year – Social Media: MSLGROUP

More than 3,200 entries were submitted to The 2013 American Business Awards and 320 executives nationwide participated in judging to determine this year’s Gold, Silver and Bronze Stevie Award winners.

Last night’s presentations were taped and will be broadcast by the Business TalkRadio Network (www.businesstalkradio.net) on Wednesday and Thursday evenings.