The newest Stevie Awards program, the German Stevie Awards, is now accepting nominations from all organizations operating in Germany at www.StevieAwards.com/Deutschland. 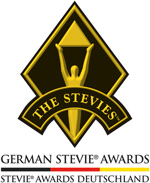 Recognizing the best in business in Germany, the program is offering the lowest entry fee of the year at 99 euros for all entries submitted by the November 5 deadline. Entry fees will rise substantially on November 6, through the final entry deadline of December 10.

The German Stevie Awards opened for entries in mid-August and have received an impressive number of nominations thus far from a wide variety of organizations.

Harald Oberhofer, Director of Corporate Communications at optivo and a Stevie Award winner, shared his thoughts about the new German Stevie Awards. “German companies are acting more and more internationally,” Harald added. “The German Stevie Awards might help to deepen our global mindset. At the same time, I think it’s great that German business achievements are going to be recognized through these new Awards, and that German innovations and product highlights will get the visibility they deserve.”

The German Stevie Awards welcome nominations from all organizations operating in Germany – large and small, for-profit and non-profit, publicly-held and privately-held - with a wide range of categories to choose from, including:

Judging for the competition will be conducted in two rounds. The first round will determine Gold, Silver and Bronze Stevie Award winners in each category. Stevie Awards competitions typically feature more than 200 executives as judges. Those winners will be announced on February 23.

To learn more about the German Stevie Awards, visit our Frequently Asked Questions webpage at http://www.stevieawards.com/pubs/gsa/about/514_2923_24742.cfm.