Revelations From a Stevie Awards Judge in Vietnam

Dale E. Gerstenslager is General Manager, Public Relations & Communications for Doosan Heavy Industries Vietnam Co., Ltd.  He has been a judge for the Stevie Awards for Women in Business for the past two years, and plans to to assist with the Asia-Pacific Stevie Awards judging early in the new year. 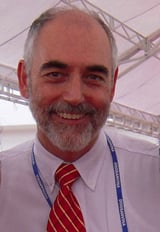 We talked with Dale about his company, working in Vietnam, and judging the Stevie® Awards. He told us he’d learned some useful things from his judging experience: “First and foremost I’d have to say that as a judge for the Stevie Awards for Women in Business I’ve learned a great deal. It has been an opportunity to see some amazing Public Relations and Communication campaigns.  The entries spanned the globe and covered a wide spectrum of categories.  Many times I found myself taking notes and thinking: What a great idea.”

Dale is now looking forward to reviewing the Corporate Communications Awards, Investor Relations Awards, and Public Relations Awards categories of the Asia-Pacific Stevie Awards.
“The Stevie Awards create a virtual think-tank that provides fertile ground where creativity can blossom and grow,” commented Dale.  “Rarely in life do true ‘epiphanies’ occur; so anytime people share ideas, doors in the mind begin to open and possibilities expand, with one idea leading to the next.  That’s how programs like the Stevie Awards help business leaders find new opportunities to increase market share and expand their business.”

We asked Dale why The Doosan Group, an international company headquartered in South Korea, was operating in Vietnam.  “The Doosan Group chose Vietnam for its $330M investment because of a unique set of incentives and circumstances offered by the leaders of Vietnam,” Dale explained.  “It began with a set of critical criteria followed by a lengthy global search and an extensive due diligence of the many proposals put forth by countries from all over the world. Doosan ultimately selected Vietnam because of the outstanding support and stability of the local, regional, and national governments, an unbeatable package of financial incentives, an eager labour force, and a coastal location that allowed us to build a dedicated port that would give us ready access to major sea lanes.”

Since Dale is a specialist in communications in the region, we asked him for some tips for companies thinking of doing business in Vietnam. “First, do your homework,” advises Dale. “And that should involve consulting with those that have ‘been there, done that,and have the T-Shirt to prove it.’ That will save a ton of time and money in the exer-cise and get you into production much faster than would happen otherwise.
“Second, Vietnam is evolving at such a rapid pace that you should be prepared to be flex-ible—like you’ve never been before or even imagined possible—then double that.”

We asked Dale what excited him most about his work. “Communications is foundational to all that we do in life,” he told us. “So finding a new, more effective way to reach someone—be it a customer, co-worker, or community—is both challenging and exciting. It keeps my wheels turning and my mind working.  Here in Vietnam, the communications industry is morphing on an almost daily basis. It is still developing, but to look back just a few years and compare it to today, I see tremendous improvement and even greater potential.”

After a 25 year career in the media, living and working in six countries and 14 U.S. states as an award winning editor, journalist, and publisher, Dale Gerstenslager moved from mass communications to public relations and communications.  He accepted a position In Vietnam with Doosan in 2008 where he planned, launched, and now leads the Public Relations and Communications function for the Doosan Group’s $300 million investment in Vietnam.

Doosan Vina is a high-tech industrial complex in the Dung Quat Economic Zone of Central Vietnam’s Quang Ngai Province.  It covers 110 hectares, employs 3,000, and has shipped over $1 billion U.S. of product to global markets.  The company supplies the mega infrastructure products that make modern life a reality. Doosan Vina’s products include: boilers for thermal power plants; heat recovery steam generators that increase the efficiency of a typical power plant by over 30%; 4,500 ton desalination plants that are the size of a football pitch and turn 95 million liters of sea water into fresh per day; material-handling systems like the cranes that are the heart of logistics at ports around the world; and chemical processing equipment that turns the earth’s natural resources into the useful products we use every day.

About The Doosan Group:
The Doosan Group is a global multinational focusing on power, water, and other infrastructure developments worldwide. The company is Korea’s oldest business operation, tracing its roots back to 1896 with the opening of the Park Seung-jik Store. The company is headquartered in Seoul, South Korea and has operations in 37 countries, over 35,000 employees, and $22 billion in annual revenue.