How a Stevie Award Winner Is Opening New Markets in China

Winners in the 2015 Asia-Pacific Stevie® Awards will be notified on April 22, and celebrated on June 5 in Shanghai. 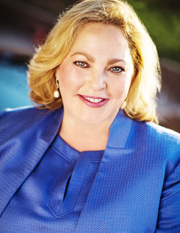 Launched in 2012, iPai, the first wholly foreign-owned auction house in China, was designed as the first auction house to sell Chinese consumers a wider selection of goods beyond artwork. The auction house also works with businesses to sell their products at live auctions in its Shanghai showroom, at local Chinese malls, and online. In addition, the company helps with market entry for businesses that are looking to import their products into China, and assists with logistics, registering trademarks and logos, market research, and actual sales in the China market.

"Our service lets small businesses test the Chinese market and understand consumer tastes before they make a larger-scale investment to enter China," said Deb Weidenhamer, Founder and CEO of iPai Auction Co., Ltd. Deb is no stranger to the auction business. She founded the Phoenix-based American Auction Co. in 1995.

Ensuring Client Success
We asked Deb what winning a Stevie® Award has meant to her company. She was happy to elaborate. “Our company prides itself in not only being successful internally, but making sure our clients are successful. Winning this award helped showcase the progress we’ve seen from the U.S., China, and beyond, and helps our clients to see the well-rounded approach we take in selling their products through auction and how we can help them further their business goals.”

She added: “The award has also helped our team internally to truly see the vision of iPai and where it is headed.”

Furthering Credibility
Deb also talked about how winning in the Asia-Pacific Stevie® Awards has helped broaden awareness of iPai in the region: “Winning this prestigious international business award has furthered our company’s credibility not only in the U.S. and in China, but also in other countries across the globe. We currently sell to people across the world and are looking at expanding physical locations in additional markets. Having the credibility of awards such as the Stevies paves the way to make this a clear reality.”

Being Willing to Learn

We asked Deb for some insight on what it has been like to start a new business in China. “I have met a few people in China who come in with grand ideas of how China should work and how they can change it,” Deb told us. “Americans might call this being visionary. In China, it’s perceived as presumptuous and insulting. In a place with thousands of years of history, you must be aware that who you are is irrelevant. You need to start fresh to build a reputation and adapt to the local culture—and be willing to learn about the people of China.”

Continued Deb: “Doing business in China isn’t something you can decide one day is a good idea. It takes research and careful planning. Most important, it takes a commitment to want to be in the market. Success rarely comes quickly anywhere, and it comes even less frequently in China. Failure to embrace the intricacies of culture and protocol will allow you to spend a lot of time getting nowhere–and leave you oblivious to your fate.”

Introducing Chinese Consumers to American Products
In 2013, iPai organized more than 100 auctions and introduced Chinese consumers to thousands of American products like California craft beer, deep fryers, cigars, and nutritional supplements. “Products many times start at $80, but can be auctioned for as much as $23,000,” Deb told us. “Watches and handbags have been particularly popular.”

"Businesses need to know that if they have a good quality product, Chinese consumers are willing to pay for it," continued Deb. "You could even end up selling at a better price and higher quantities than in the U.S."

Looking for Good Clients
iPai has a sales force that looks for interesting small businesses to take on as clients, Deb explained. It also has a review team that heavily screens the products and rejects those that don't meet their standards.

Because of this, she said, products almost always resonate at auction. Less than 10 percent go unsold, in which case they're featured at another auction or returned to the consignor and iPai doesn't get paid.

“Although iPai typically works with companies,” said Deb, “it occasionally accepts independent entrepreneurs and inventors who want to discover if a product is right for China.”

The auction business has proven to be a stimulating one for Deb Weidenhamer. “Auctions are an ever-changing industry, always keeping me on my toes,” she explained. “Bringing everyman luxury goods into China through auctions is a very exciting concept and truly breathes new life into small- to medium-sized businesses, as well as larger enterprises. Giving Chinese consumers the opportunity to purchase items they wouldn’t have had access to previously and giving businesses the opportunity to enter China that may have not had that opportunity previously is a very fulfilling experience.”

consumer products at auction and has seen incredible results from the outset of its 2011 formation.

iPai also assists Western businesses to gain access to the ever-growing Chinese marketplace through market entry services introducing “new to China” goods directly to consumers and establishing real market data. In addition to sharing her time between the U.S. and China and running her businesses, Weidenhamer is a lecturer on entrepreneurship at several Chinese universities and assists the China Association of Auctioneers in learning best practices of Western auctions.

Recognized for her growth as a global entrepreneur and small-to-medium enterprise expert, Weidenhamer was asked to pen “Capitalizing on China” for The New York Times. She has also spoken at the Harvard Business School, INC 500, and has been featured in several U.S. and Chinese media formats including China Daily, CNBC, Fox Business, NPR, Money Watch, and Global Entrepreneur. Additionally, Weidenhamer was the principal cast member of Discovery Channel’s “Auctioneer$” reality TV show.

About iPai:
iPai (Shanghai) Auction Co., Ltd. is a Wholly Owned Foreign Enterprise (WOFE) and an affiliate of the American auction firm Auction Systems Auctioneers & Appraisers Inc. (Auction Systems), headquartered in Arizona, USA. With 18 years of history, this progressive auction firm has come to have a broad influence on the auction industry nationally and has been recognized numerous times for its high and consistent growth.

Shanghai offers many options for quality goods but large retail stores come with over-enthusiastic sales staff, lengthy queues, and demanding prices that seem to increase every day. Instead of being told what items are worth, iPai offers a broad selection of contemporary luxury items, and allows customers to decide how much to bid for their favorite items. To find out more, visit: https://www.ipaiworld.com/Home/About