Winners in the third annual Asia-Pacific Stevie® Awards, the only awards program to recognize innovation in business throughout the entire Asia-Pacific region, will be honored this Friday, May 27 in Sydney, Australia.

For the first time at the Asia-Pacific Stevie Awards gala, the awards presentations will be broadcast live.  Watch the ceremony on Friday, May 27 on Livestream via the Stevie Awards’ Facebook page at 7:40 pm / 19:40 local time (9:40 am GMT, 5:40 am ET). 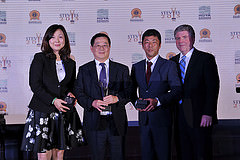 You'll be able to watch the presentations on Facebook only if you're on a desktop device, however.  To watch the event on your mobile device, watch it here.

Won't be awake as the ceremony is taking place? Don't fret -- the Livestream will be saved to watch later on the webpages linked above.