Winners in the second annual Asia-Pacific Stevie® Awards, the only awards program to recognize achievement in business throughout the entire Asia-Pacific region, were announced today.  The list of Gold, Silver and Bronze Stevie Award winners is available at http://Asia.StevieAwards.com. 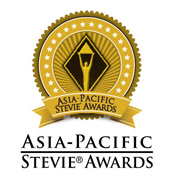 The Stevie Awards are considered to be the world's premier business awards, conferring recognition for achievement in the workplace over the past 13 years in programs such as The International Business Awards and The American Business Awards.

Stevie winners will be presented their awards at a gala banquet at the InterContinental Hotel in Shanghai, China on Friday, 5 June.  Tickets for the event are now on sale.

The Stevie Award trophy, made by the company that makes the Oscar and other major awards, is among the world's most coveted prizes.

Visit http://Asia.StevieAwards.com to learn more about the program.