It is two minutes and fifty-three seconds of simple, but remarkably effective storytelling.

A silver-haired man, dressed in a dark sport coat, walks through the streets of Norman, an unpretentious American town in the heart of Oklahoma. As he slowly meanders down the city streets, he recites a poem in his measured, slightly raspy voice.

The first verse describes a frazzled gentleman who, upon visiting a friend, begins to open up about his latest difficulties. If not for its business slant, like worries over “negative cash flow,” it would be easy to confuse the nuanced lines for those of Robert Frost. 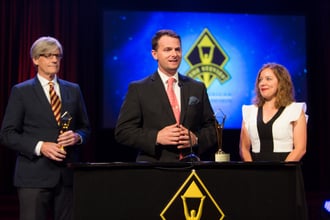 Eventually, the friend he’s come to see changes his fortunes. Now, he has systems “designed with vision and purpose” that provide better insight into his operations. He and his wife start doing more travelling, thanks to generous dividend checks.

So it is that McMahon Marketing helped its client, a local business coach, address one of its biggest challenges: a lot of prospects simply don’t know what these coaches do, or why they need one.

McMahon says the spot’s success shows that there’s a viable way to address those challenges. “The message is: Others have done it. You can too, and here’s how.”

A big part of the ad’s appeal is its stripped-down, authentic vibe. It stars the client himself, Martin Holland, who intones a poem he originally wrote while taking his dog for a walk.

In it, Holland, who works for Las Vegas, America-based ActionCOACH, finds a way to demystify his industry, turning the business owner-coach relationship into a uniquely personal interaction.

“The thing about coaching is people don’t know what it is,” Holland told his hometown newspaper, The Norman Transcript. “Or if they do, they have misbegotten ideas about what it is. We were trying to show before and after of the stresses small business owners go through and how their lives change.”

McMahon saw Holland’s rhyming verse as the perfect way to get his client’s message across. With a budget of just $1,000, he enlisted a local film director, Cooper Williams, to turn it into an ad.

“We created something that we felt like was top quality, that we were really proud of,” McMahon told the newspaper. “We took a shot, not really expecting to win anything because of the nature of the competition and the quality in the Stevie awards. It was very exciting for our team and all of the hard work that they do.”

Already, the video has been having a big effect. Holland says he recently spoke with two business owners in northeast Oklahoma who are perfect examples. The husband saw the need for a coach to help revitalize the company, but his wife was hesitant.

Upon seeing the video, that immediately changed. “She said, ‘I get it now. I’m all in.’”

The spot is also a huge shot in the arm for McMahon Marketing, a five-year-old inbound marketing agency with a staff of just seven full-time employees. Despite their lean budget, they were proud to win the Gold with several multinational firms with billions of dollars in revenue as their competition.

“It’s so important for not only our credibility, but also the talent we recruit,” says McMahon. “I feel we have the most talented team around, and this is just validation that we are creating nationally recognized videos and marketing services,” he said.