Alain Meric is a Senior Vice President at Etisalat, the Middle East’s largest telecommunications operator, and Chair of the committee for final judging of the customer service awards categories in The 2012 International Business Awards, the world's premier business awards competition. (While final judging for this year's IBAs is now underway, the 2013 Stevie Awards for Sales & Customer Service are now accepting entries. Get your entry kit today.) Here we asked Alain’s advice on maintaining customer satisfaction. 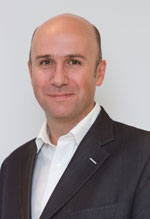 What are your top 3 tips for companies aiming to provide award-winning customer service?

What item of news recently caught your eye and why?
The deadly fires in Northern Spain, which were probably caused by a cigarette butt.  This is an unfortunate and sad illustration of how a small action can have an enormous impact.

Do you have a favorite app?
I am not a great user of apps, but enjoy fresh news on my iPad or Android smartphone.  Recently, the live updates from the Tour de France or the London Olympics on L’Equipe.fr (a French sports magazine) are what I’ve been using the most. (FREE app available for iPhone, iPad and for Android.)

If you could choose another profession, what would it be?
Definitely a reporter for either The Economist or National Geographic.

As someone at the top of your profession, what keeps you inspired or makes you hit the ground running in the morning?
There is still so much to do …

About Alain Meric
Alain Meric is Senior Vice President, Customer Experience Management, at Etisalat, the largest telecommunications provider in the United Arab Emirates. Alain started his career in the hospitality industry at the Intercontinental Carlton in Cannes, France.  He then moved to Disneyland Paris, where he developed a passion for outstanding customer experience and branded service differentiation. Alain later moved to the UK, where he helped companies such as T-Mobile and Virgin Mobile set up customer service centers in South Africa, India, and the Philippines.  He later served as Executive Director of Member Services for AOL.

After completing a master’s degree in Business Administration at the University of Chicago Booth School of Business, Alain accepted the challenge to lead a customer-centric transformation of Etisalat. Alain is based in Dubai and indulges his strong sense of adventure by spending most of his spare time either sailing or in the desert.

About Etisalat:
Etisalat is the Middle East’s largest telecommunications operator and the GCC’s third largest corporation. With a market value of approximately Dhs. 80 billion (USD 20 billion) and annual revenues of over Dhs. 32 billion (USD 8.7 billion) Etisalat is today on the verge of being numbered amongst the top ten operators in the world. Etisalat is a multinational, blue chip organization with operations in seventeen countries across the Middle East, Africa, and Asia. An estimated 2 million people benefit from regular work supplying Etisalat or its customers, including 53,000 who are directly employed by the company. Etisalat now has access to a population of more than two billion and its satellite network provides services over two thirds of the planet’s surface. To learn more about Etisalat, visit www.etisalat.ae.