Deploying the Cloud in Afghanistan: How a Stevie® Awards Winner Saves Lives in a War Zone

Dynamics Research Corporation (DRC) of Andover, Massachusetts, won Stevie® Awards in both the IT awards categories and the new product awards categories of The 2012 American Business Awards for their support in building and deploying the cloud-based DCGS-A system. (The final entry deadline for The 2013 (11th Annual) American Business Awards, the top business awards in the United States, is April 24, If you haven't already done so, you can request your entry kit here and it will be emailed to you right away.) Here we look at how DRC is helping the U.S. Army deploy a cloud-based intelligence system. 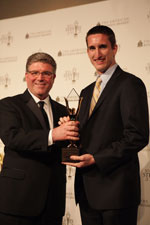 American servicemen and women face daunting threats in war zones—insurgents, snipers, terrorist bombers—and access to accurate and timely information is a matter of life and death. Putting that information into the hands of these frontline fighters is the mission of the Army’s Distributed Common Ground System (DCGS-A) Cloud.

Imagine a military intelligence brigade that needs to know all of the activities occurring in a village that might indicate unrest—for instance, who has met with the village elders in the past month, or what new projects have been started that are not funded by NATO. The U.S. Army has hundreds of intelligence feeds used to support operations in the field, including ground sensors, unmanned aerial vehicles, and human intelligence.

Too Much Information
As intelligence data-collection grows exponentially, so too does the corresponding complexity of information that end-users have to analyze. The Army’s computing platforms have to meet the increased demand required to extract useful information in support of a mission, whether it involves safely entering a village or capturing an enemy leader.

At the same time, the Army must make this capability available through a streamlined operational infrastructure in the field—the mechanism that allows the troops access to timely information where and when they need it.

Cloud In A Box
In 2011, DRC and its partners worked with the U.S. Army to build and deploy the DCGS-A Secret Internet Protocol Router cloud solution. Also known as DSC, this cloud solution is an Internet-scale ingest, processing, and storage infrastructure for intelligence data. It serves as the foundation for the Army's rapid adoption of next generation intelligence systems. DSC is literally a ‘cloud in a box’ that is deployed by shipping container to sites in the United States and overseas.

Boots On The Ground
To ensure the success of this cloud solution, DRC deployed one of their own experts, Douglas Grosvenor, to work closely with the Army on the ground in Afghanistan.  Because of this, Grosvenor was able to:

Since Grosvenor’s work on the DCGS-A spanned U.S. and Afghanistan time zones, his working days stretched around the clock. His dedication has led to the development of an innovative technology that better meets the Army's intelligence needs.

Says Grosvenor: “During my six-week deployment in Afghanistan, I was able to work closely with the client and come back with more requirements to ensure the success of the system—putting more powerful and useful computing in the hands of our war fighters.”

Exceptional Security
DRC was one of several contractors who developed the system as subcontractors to Booz Allen Hamilton. DRC had leadership roles in the development, architecture, integration, testing, and in system delivery. DRC’s team was critical in these areas and instrumental in creating the system.

Given the high sensitivity of military data, building exceptional security controls was vital to the cloud deployment. To that end, DRC designed and implemented the backend and interface of DSC, creating a secure cloud that can be accessed on the fly, and providing analysts with a means to share and enrich data.

About Douglas Grosvenor:
Grosvenor joined High Performance Technologies, Inc., a DRC company, in 2009, straight from college and quickly became an expert in his field. In addition to his responsibilities under the DCGS-A contract, Grosvenor is currently working on a Master’s Degree in Computer Science and is active in corporate activities including community service, college recruiting, and developing initiatives to enhance DRC's employee programs. His efforts were recognized with the company’s Employee of the Year Award in 2011.