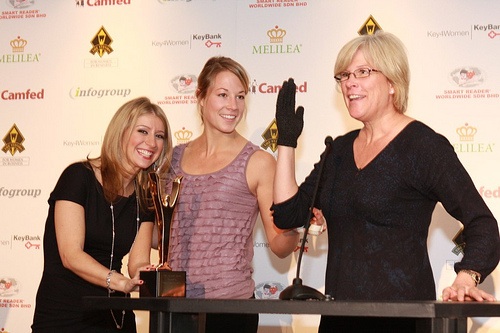 In February 2010, when Jennifer Spencer went to Washington D.C. to visit her daughter, Jean, it was extremely cold and the streets were lined with dirty snow. Jean, who was working as an intern for the Wall Street Journal, was using an iPhone to keep in touch with her office.  While walking along the street, Jean told her mother: “Mom, I am missing calls from my Editor.  When my phone rings, I have to find my phone in my bag, pull off my gloves with my teeth, and then shove them in my pocket in order to take the call.”  She added: “You have to invent gloves that work on touch screens!”

Jean was simply echoing the problem that smartphone and tablet users know only too well: regular gloves don’t work on touch screens. Fortunately for Jean, her mother is both an entrepreneur and a woman of great resourcefulness. The idea intrigued her.

How Do Touch Screens Work?

Jennifer began by studying how touch screens work. Contrary to popular belief, touch screens are not heat sensitive.  They are capacitive, meaning that the screens respond when tiny amounts of moisture, salts, and oils in the skin allow electrons to flow between you and your device. However, when something non-conductive comes between you and your device—such as an ordinary pair of gloves—the touch screen doesn’t respond and the device won’t work.

For Jennifer, the solution was obvious: Create a warm glove that would be able to conduct the body’s own bioelectricity to the capacitive touch screen.

And so a new product was born: Agloves®. Ag is the symbol for silver on the periodic table and is the most conductive element. With Agloves, the body’s natural bioelectricity flows through the glove to your touch screen device and maintains near-perfect connection.

Agloves combine a snug, user-friendly design with tech-savvy functionality. The gloves deliver incredible accuracy and intuitive operation. Wearers can swipe, pinch, and pull their touch screens at the same speed they would with bare hands. An added bonus is that, in addition to being conductive, silver is a thermal regulator, making the gloves warmer than most knit gloves—and antimicrobial.

The next step was to commercialize the product. Circumventing the traditional brick and mortar retail strategy, Agloves launched its ecommerce website on September 29, 2010.

Working as a mother-daughter team, Jennifer and Jean used an innovative social media strategy to introduce their new product. While their new company was not able to afford television advertising, it needed to level the playing field when it came to competition from other computer accessory and glove companies. And that is exactly what Agloves did by its savvy use of social media.

By December 2010, Agloves touch screen gloves had sold in 43 countries and were selling at a rate of a pair a minute. Tech-savvy consumers around the globe are falling in love with Agloves.

About Jennifer and Jean Spencer

Jennifer Spencer is a creative thinker and entrepreneur who has been instrumental in myriad start-up companies and innovations over the last 20 years. Jennifer's marketing and business development strategies have provided successful solutions for her clients. Jennifer is president of Agloves.

Jean Spencer is VP of Communication. After receiving a bachelor’s degree in Journalism, Jean decided to take a leap from the world of newsprint into the world of online communications. Jean heads all things social, communicative, and networked for Agloves including media relations, PR, social media, and the company’s online presence.

Agloves® is a patent-pending winter touch screen glove company.  The Boulder, Colorado-based business launched September 29, 2010 and currently employs seven people.  Agloves was globally successful right from the start.  Within three months of launching the business, Agloves had sold roughly 60,000 pairs of gloves in 43 countries worldwide from their online store, www.Agloves.com.   Agloves is currently expanding into retail sales in the European Union.

What is your favorite inspirational new product idea story?