Finalists were announced today in The 13th Annual American Business Awards. Lists of Finalists by category have been published at http://www.StevieAwards.com/ABA.

The American Business Awards are the U.S.A.’s premier business awards program. All organizations and individuals in the U.S.A. are eligible to submit nominations. 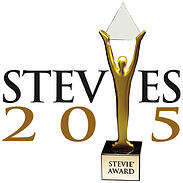 This year’s Gold, Silver, and Bronze Stevie® Award winners will be announced at two banquets. The first will take place on June 22 at the Fairmont Millennium Park Hotel in Chicago, Illinois; and the second, with awards in the new product and technology-related categories, will be held on September 11 at the Julia Morgan Ballroom at The Merchants Exchange Building in San Francisco, California. More than 800 executives are expected to attend the events. The ceremonies will be broadcast nationwide by the BizTalk Radio Network.

Finalists were chosen by scores of business professionals nationwide during first-round judging in April and May. Members of specialized final judging committees will determine Gold, Silver, and Bronze Stevie Award placements from among Finalists in judging that will begin later this month.

Voting will open in early July for the People’s Choice Stevie Awards for Favorite New Products, a component of The American Business Awards that invites the general public to vote for their favorite new products of the year in a number of categories.

For press credentials for the June 22 and September 11 awards banquets or for more information, contact Maggie@StevieAwards.com