The Stevie® Awards has issued a call for entries for the 2016 (third annual) Asia-Pacific Stevie Awards, the only business awards program to recognize achievement in business throughout the entire Asia-Pacific region.

The early-bird entry deadline is December 3.  The final entry deadline is January 27, 2016, but late entries will be accepted through March 23 with the payment of a late fee. Complete entry details are available at http://Asia.StevieAwards.com. 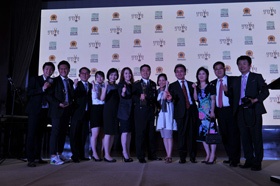 The Asia-Pacific Stevie Awards are open to all organizations in the 22 nations of the Asia-Pacific region. The categories have been redesigned to focus on recognizing innovation in all its forms, wherever and however it is achieved in the workplace. Nominations will be accepted and judged in seven languages – Chinese, English, Indonesian, Japanese, Korean, Malay and Thai - in the following category groups:

Judging of nominations will be conducted from February to April by more than 100 executives around the world. Gold, Silver and Bronze Stevie Award winners will be announced on April 20. The winners will be celebrated during a gala banquet on May 27 in Sydney, Australia. Some of the Asia-Pacific region’s most distinguished companies have won Asia-Pacific Stevie Awards in the past two years including Cisco Systems, Crocs Singapore, Delta Airlines, DHL Express, Ford China, Globe Telecom, MetLife Asia Ltd., Sony, and SYSPRO Software, among others.