The atmosphere was festive when Michael Gallagher, founder and president of the Stevie® Awards, and the well-known news anchor Leslie Nachmann, in her role as MC of the evening, presented the winners of the German Stevie Awards with their Gold, Silver and Bronze Stevies last Friday, May 3, at the Munich Hotel Four Seasons Kempinski. More than 160 guests were present when high-ranking representatives of more than 50 winning companies from all over Germany received their awards on stage.

The highlight of the evening was the presentation of the two Grand Stevie Awards. 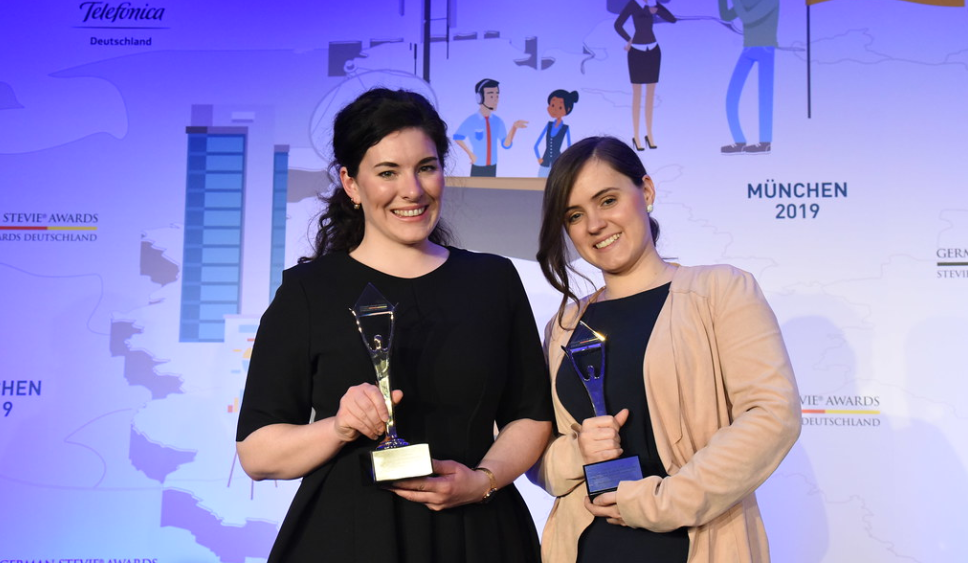 The Grand Stevie Award for the highest-rated nomination was presented to the production company for image and advertising films twosyde media from Leipzig with its client Marketing Dresden for the best image film of the year "Liebes Dresden". No other of the approximately 400 nominations received a similarly high average rating. "It's not just the award that makes us grateful, it's the fact that something - born of our hearts and minds - has been able to persuade the people behind to give it to us," says Andreas Schmidt, CEO of twosyde media GmbH is delighted.

The Grand Stevie Award for the Company of the Year was awarded for the second time in a row to CROWDCONSULTANTS 360 from Berlin for their multiple Stevie Award wins. The crowd-based corporate and personnel consultancy won big again at the 5th German Stevie Awards. The company won five Gold and four Silver Stevies.

Founder and Chairman Damiano Albrecht and his team received the Gold Stevie Awards from Michael Gallagher for Company of the Year Awards for Business Services, Diversified Services, and Internet & New Media, and Management and Founders Teams for the Year. The Silver Stevies went to CROWDCONSULTANTS 360 for the most innovative company, the best B-2-B service, and the HR department and HR team.

Exceptionally successful at the German Stevie Awards 2019 was Werner Schmid GmbH from Fulda. The leading supplier of metal and plastic parts received a total of four Gold Stevie Awards as Company of the Year (Production & Manufacturing) and the best Corporate Social Responsibility program. The two managing directors Matthias and Joachim Hauß received the Entrepreneur of the Year Award for their achievements. The former managing director and shareholder Monika Hauß-Schmid accepted the Lifetime Achievement Award.

"I am very happy about these awards. Especially the award for my life's work means a lot to me personally. During my time as an entrepreneur and as a volunteer for Perspektiva and IHK (Chamber of Commerce), I experienced profound changes; to work in the way, but also in the way social issues such as inclusion are dealt with. In the face of constant change, I have always been guided by what I consider necessary and important - economically as well as socially. It fills me with pride that the jury sees this as worthy of recognition, “ says Monika Hauß-Schmid.

Paysafe Pay Later from Munich was pleased to receive three Gold Stevie Awards. The white label payment solutions provider has been recognized as Financial Services Company of the Year and the Best New Ecommerce Solution. Managing Director Claire Gates was named Manager of the Year for Financial Services.

Great news for the future of the German Stevie Awards reported Michael Gallagher. In his opening speech, the president and founder of the Stevie Awards announced that the German Stevie Awards would be open to all German-speaking European countries for next year’s edition starting in Fall 2019: "We invite all German, Austrian, Swiss, Liechtenstein, Luxembourg and Belgian business makers and innovators, to compete with their achievements and successes and to face an international German-speaking competition.“

Any changes, from logo, to terms and conditions and to the website, will be made until the opening of the 2020 awards in September. A preview of the new logo is already available on the awards website: https://stevieawards.com/gsa/photos-and-logos-.

Offstage videoclips with interviews of the winners and jury are available at https://www.youtube.com/watch?v=J369eo41IHM&list=PLxZrTaLFgyEKJ31YMMm4ct1yjRp7qT-TV

An overview of all winners of the 2019 German Stevie Awards is available at https://stevieawards.com/gsa/2019-gewinner-der-german-stevie-awards