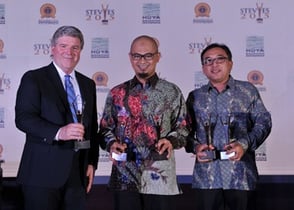 Gold, Silver and Bronze Stevie Award winners in the various categories were announced on April 20.  Those awards were determined by the average scores of more than 50 executives worldwide earlier this year.

All awards will be presented to winners during a gala event at the Westin Hotel in Sydney, Australia on Friday, May 27.  Tickets for the event are now on sale.

“We are very pleased with the results of the 2016 Asia-Pacific Stevie Awards, with the growth in the number of entries and the depth and breadth of the stories of business innovation that we received,” said Michael Gallagher, president and founder of the Stevie Awards.  “We are very much looking forward to greeting and celebrating this year’s winners in Sydney on 27 May.”