The American Business Awards® are the premier business awards program in the U.S.A.  All organizations - public and private, for-profit and non-profit, large and small - may submit nominations. The 2021 winners were celebrated during a virtual awards ceremony on Wednesday, June 30.

The 2021 American Business Awards winners accepted their trophies and medals from home in lieu of an in-person awards gala. Each winning organization that participated was honored during a virtual ceremony on Wednesday, June 30. The ceremony live stream was viewed by over 1,000 individuals comprised of winners, friends, and family.

Winners accepted their awards by filming 30-second acceptance speeches from their home offices, corporate settings, and even while holding their prized Stevie trophies outdoors. In addition to pre-recorded acceptance speeches, the ceremony featured videos about the winning organizations, messages from Stevie Awards judges and sponsors, and surprise celebrity guests. This year's surprise guests included actor and director of The Office, Brian Baumgartner, celebrity magician Penn Jillette, and Paula Abdul.

"Congratulations to all of you Stevie Awards winners on your business achievements," Baumgartner said. " I know this last year has been tough, so if you won an award, you really did something right!...But, onwards and upwards. Let's look to the rest of 2021 and make it Twenty-twenty-awesome."

A complete list of The 19th annual American Business Awards winners by category can be found here. The winners are determined by the average scores of more than 250 professionals worldwide in a three-month judging process. Some of the winning organizations that participated in the virtual awards ceremony included:

A favorite part of the virtual ceremony platform was our "virtual red carpet," which transformed the background of attendee photos into the 2021 American Business Awards step and repeat backdrop. View the red carpet photo gallery. 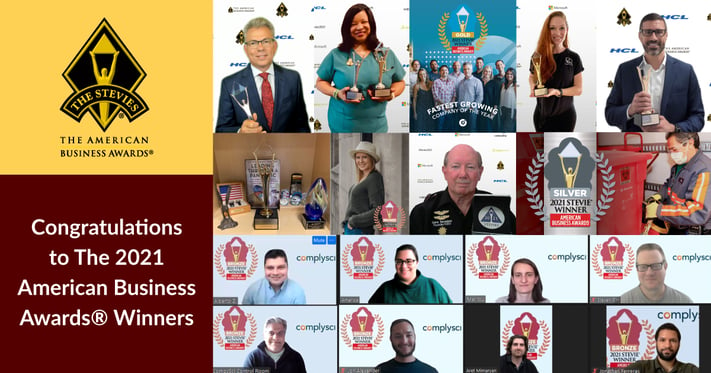 The ceremony replay, individual acceptance speeches, and red carpet interviews are available to watch on YouTube and below.

Of the winning organizations that participated in the June 30 virtual awards, two were esteemed Grand Stevie Awards Winners; The Salvation Army and Tinuiti.

Highest-rated COVID-19 Response Category Nomination: The Salvation Army’s (New York, NY) nomination of Seth Ditmer, their Deputy Director of Operations - Emergency Services, won Gold for Delivery Hero of the Year, for his oversight of the delivery of pantry boxes to home-bound seniors, people with compromised immune systems, and coordinated mass grocery deliveries to soup kitchens at The Salvation Army’s 38 community centers in the New York City area. With an average score from the judges of 9.5/10, the nomination wins a Grand Stevie Award as the highest rated of all those in the competition’s COVID-19 Response categories.

To close out the 2.5-hour virtual awards show, the President of the Stevie Awards, Maggie Gallagher Miller, remarked on the creativity from this year's winners and her anticipation of celebrating the 2022 American Business Awards in person in New York City. "Thank you again for being here today to celebrate your many accomplishments over the past year, she said. "It was great to hear so much creativity and positivity from the Stevie Awards community. Have a great rest of your day and we hope to see you in person next June."