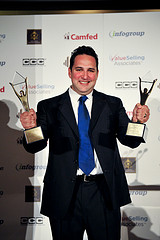 The final day for submitting entries to the 2012 Stevie® Awards for Sales & Customer Service is January 18. Showcase your organization's sales excellence and customer service excellence by submitting your entries today. (Request your entry kit here.)

Organizations and individuals worldwide are invited to submit entries. There are dozens of opportunities to win for both private and public organizations, small and large organizations, and non-profit and for profit organizations. The 2012 competition will recognize achievements since July 1, 2010.

How the submission process works:

Benefits of submitting a Sales and Customer Service entry:

Give the Gift of the Stevie Awards: Nominate Your Team Today 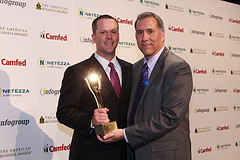 Why Give the Gift of the Stevie Awards?
The Stevie Awards are the world's premier business awards.  Not only does a nomination represent appreciation and a recognition of success, but all Gold, Silver and Bronze Stevie Award winners will be recognized on a national and international scale- an invaluable gift!

Happy holidays to you and yours, and best wishes for continue success in the New Year!

How will you use a Stevie Award nomination to reward those in your organization?

The final day for submitting entries to the 2012 Stevie® Awards for Sales & Customer Service is January 18. Recognize your organization's sales excellence and customer service excellence by submitting your entry today.

All organizations and individuals worldwide are invited to submit entries.  The 2012 competition will recognize achievements since July 1, 2010.

To start your submission process, you should:

Still have questions? Contact us at help@stevieawards.com; we'd love to answer your last-minute questions!

More than 200 professionals worldwide will participate in the 2012 judging process.  Finalists will be notified on January 25.  Starting in 2012, all Finalists will be recognized as Gold, Silver or Bronze Stevie Award winners.  Results will be announced at the sixth annual awards banquet on Monday, February 27 at Caesars Palace in Las Vegas.

Leave a comment and let us know which Sales or Customer Service award your organization deserves most!

Have questions? Contact us at help@stevieawards.com; we'd love to help you get started on your 2012 submissions!

Not going to make the early-bird deadline? Don't worry - the next ABA deadline is March 28, 2012!

As the December 14 early-bird deadline for The 2012 American Business Awards approaches, we encourage everyone to submit their entries for the 2012 ABAs. Get your entry kit here.

Below are the top 10 reasons why you should enter:

What's your number one reason for applying for The American Business Awards?

How to Win Women Helping Women Awards in the Stevies

Gwen Rhys is the Founder & CEO of Women in the City, London, United Kingdom, and winner of the Women Helping Women Award in the 2011 Stevie Awards for Women in Business. The 2012 edition will open for entries in May - join the mailing list to get the entry kit as soon as it's available.

In 2003 Gwen Rhys invited a few women working in the City of London to bring some of their female colleagues to lunch.  The idea gathered momentum and within three months 200 women gathered to hear an inspirational speaker, share experiences, and network. This simple concept became Women in the City (WIC). Led by Gwen, and supported by a small team, WIC has evolved into an organization that promotes, recognizes, and rewards female talent and creates opportunities for women to achieve their career goals.

We asked Gwen’s advice on what she thought were the three most important ways women can help other women in the business environment today.  Here are her suggestions.

1. Recommend other women—it reflects well on you.

Men “get” the power of recommendation. Let’s say Peter recommends John for a job in Bob’s team and the recommendation works out well. This reflects well on Peter, and Bob says: “That guy Peter’s great, he really knows how to spot talent.”

For some reason women rarely do this.  Are we nervous in case our recommendation won’t work out?  Go ahead: Make that recommendation. This is one of the unwritten rules of the game!

2. Support other women—don’t be a bitch!

Men close ranks and support one another.  How often have you seen that in meetings?  Aren’t you amazed at the way men cover for each other?

Women need to do that for one another, too.  Far too many women are bitches! They’re just waiting for the moment to show up someone else’s faults and weaknesses.

Learn from the boys. Support your female colleagues. Make sure they know you’re doing this … and make sure you get their support when you need it!

Men are forever “bigging themselves up.” They are always the fastest, richest, most intelligent; they’ve traveled further, climbed higher, dug deeper … they haven’t really, but they just can’t help speaking in superlatives.

Women—who have usually achieved MUCH more—say things like: “Oh, it was nothing really.”

Speak up for your female colleagues and friends. More important, find your own voice.  Learn to big yourself up.  Say: “Yes, I did really well on that project!”

A Signature Event
The annual Women in the City Celebration Lunch is a sell-out each year and has become one of the City of London’s signature events. Like all WIC gatherings, the lunch has a motivating and inspiring atmosphere, created in large part by Gwen’s energy and passion, and supported by the meticulous event management of WIC’s Program Manager, Marianne Bosak.

This annual luncheon includes an awards presentation, a keynote speaker, and in 2007 Gwen created the Woman of Achievement Award.  This award, presented after the lunch, recognizes senior women who, in addition to fulfilling a demanding job, are actively supporting the progress of women. Winning this award enables highly successful women to raise their profile internally and externally, with many gaining promotion to the very highest of levels.  The overall winner of this award is offered a complimentary place on the Accelerated Development Program held on the London campus of the University of Chicago Booth School of Business.

In 2010, WIC added a second award: The Future Leaders Award, presented at a breakfast event each July.  The award identifies high-potential women leaders and includes a place on the Cranfield School of Management Accelerated Talent Development Program.

In 2012, WIC will host its 10th Anniversary Women in the City Celebration Lunch. Gwen plans to add one special award for this occasion: International Businesswoman of the Decade.

Key to Success
Gwen’s ability to build long-term, mutually beneficial relationships is key to WIC’s success.   This year she has secured award sponsorship from global brands such as Google, Barclays Capital, Barclays Wealth, Bluefin, Heidrick & Struggles, niche City of London caterers Lusso, and the growing software business Patients Know Best.  WIC has partnered with leading academic institutions including the University of Chicago Booth School of Business and Cranfield School of Management, and has gained backing from major professional institutions in the U.K., including the Chartered Institute of Insurance, the Institute of Chartered Accountants in England and Wales, the Facilities Management Association, and the British Bankers’ Association. Leading women’s organizations such as The Association of Women in Property, the Medical Women’s Federation, and the Worshipful Company of Information Technologists all endorse the WIC awards program and help judge the candidates.  Gwen has gained support for her activities from numerous organizations and companies, including accessories brand knomo, Charles Worthington hair products, and The Museum of London Docklands.

Internship Program
Through WIC’s Internship Program, female students are able to network beyond their usual circles, gain confidence from hosting at events, speak with enthusiasm about WIC at interviews, acquire valuable business and life skills, and secure jobs.

WIC Foundation
In 2011 Gwen set up the WIC Foundation. Says Gwen: “The aim of the WIC Foundation is to enable individuals to make better-informed and more aspirational career choices.”  She is partnering with The Capital Community Foundation to run a pilot program in 2012, and she has already secured funding from AXA Commercial, Bradshaw Property Associates, MITIE Client Services, and Ryland House Galleries, as well as from Major Rowena Patrick (in memory of her mother, who was named after Emmeline Pankhurst, the leader of the British suffragette movement). She plans to launch a major fundraising campaign to further the Foundation’s development in the first quarter of 2013.

About Gwen Rhys
Gwen Rhys set up her first business in 1979 and sold it in 1987. She has initiated UK-wide projects that have forged links between business and education.  In 1995 she started ew-network to support female entrepreneurs. Gwen continued to run this network while setting up the talent and leadership development organization Networking Culture Limited. She launched Women in the City in 2003.

Gwen is a Liveryman and Court Assistant in the Worshipful Company of Glass Sellers; was named Management Champion by the CMI City Branch in 2009; is a Town Councillor; and is a Fellow of the RSA (Royal Society for the Encouragement of Arts, Manufactures and Commerce).

About Women in the City
Launched in 2003, Women in the City has developed a strong brand presence in London's business hubs. It promotes, recognizes, and rewards female talent; runs a highly successful annual lunch and an awards program; and offers other products and services to support professional businesswomen.  For more information go to www.citywomen.co.uk.