Other Grand Stevie Winners Include AMD, Makovsky, MWW, and Slack and Company

The Stevie® Awards held one of its awards galas for its 12th annual American Business Awards competition on Friday night, and announced the winners of its Grand Stevie Award trophies. 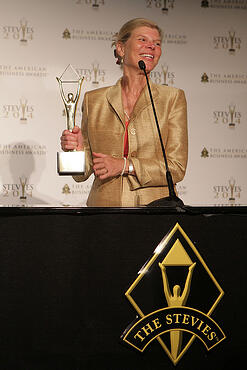 The Grand Stevie Awards were presented to the organizations that submitted the best body of entries to The American Business Awards this year, in their own name or in the names of one or more clients.  The organizations with the most points won, with a Gold Stevie Award win counting for three points, a Silver Stevie win for two points, and a Bronze Stevie win counting for 1.5 points.

Besides Quality Systems, Makovsky, MWW and Slack and Company, Grand Stevies were also awarded to the 10 other organizations with the most points in the 2014 competition.  They are

More than 260 executives attended Friday’s event at San Francisco’s Palace Hotel.  Stevie Awards were conferred in three levels of distinction: Gold, Silver and Bronze.  See the blog post issued earlier today for a summary of the other Stevie Award winners.