Finalists were announced today in the 13th annual Stevie® Awards for Women in Business, the world’s top honors for women entrepreneurs, executives, employees, and the organizations they run.

The Stevie Awards for Women in Business are produced by the creators of the prestigious American Business Awards and International Business Awards. The Stevies are widely considered to be the world’s premier business awards. 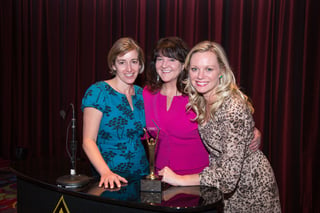 This year’s Gold, Silver and Bronze Stevie Award winners will be announced at an awards dinner at the Marriott Marquis Hotel in New York City on Friday, November 18. More than 400 women and their guests from around the world are expected to attend the presentations, which will be broadcast live on LiveStream. The red carpet pre-show will air on the Stevie Awards’ Facebook Live.

More than 1,400 entries were submitted this year by organizations and individuals around the world for consideration in more than 90 categories including Executive of the Year, Entrepreneur of the Year, Startup of the Year, Women Helping Women, and Women-Run Workplace of the Year.

Visit http://www.StevieAwards.com/Women for a complete list of Finalists by category.

Finalists were chosen by more than 110 business professionals worldwide during preliminary judging. Members of five specialized judging committees will determine the Gold, Silver and Bronze Stevie Award placements from among the Finalists during final judging that begins on October 17.