It’s all part of the job for Peter “Spida” Everett, a longtime star in the Australian Football League, and his wife, Sheree. As hosts of the hit TV and radio show “The Great Australian Doorstep,” the couple explores the country’s unique destinations and take on whatever adventure they find along the way. 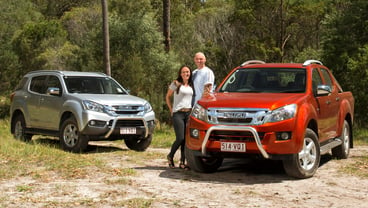 Past destinations have included Australia’s natural wonders like the Great Barrier Reef and Ayers Rock, as well as many of the charming small towns that dot the countryside. Wherever they go, the couple travel by car or RV, soaking up the land’s distinct character and meeting locals along the way.

From one episode to the next, the couple could be hiking Kings Canyon in the Northern Territory or exploring the wild and majestic Kimberley region in Western Australia. In recent years, they’ve ventured beyond the Great Down Under, filming episodes in New Zealand, China, Canada and the state of Alaska in the U.S.

Now in its tenth season, the show’s unique mix of cultural exploration and thrill-seeking has clearly struck a chord with audiences. The program is a staple on the television station 7TWO and on more than 40 radio stations across Australia. The show recently broke into the Chinese market, where they’ve inked a five-year deal with China Central Television, and have become the first Australian travel show to be picked up by iTunes.

Those remarkable achievements earned the admiration of jurors for The 14th Annual International Business Awards, which featured nearly 4,000 nominees. “The Great Australian Doorstep” came away with the Bronze Stevie in the Travel and Tourism Video Awards category.

“With his steely determination, Spida has taken on some of Australia’s biggest travel media outlets and come out on top,” says Sheree, deflecting her own sizeable contribution to the show’s success.

Everett’s 16-year football career, in which he played for the St. Kilda Saints, Hawthorn Hawks and Sydney Swans, provided the kind of fame that certainly helps when you’re pitching a new media venture.

But Sheree insists his high profile could also be an obstacle at times, especially when the pair would try to garner seed money. “People would often say, ‘Oh, he has millions. We don’t need to support him,’” she says. But after a costly divorce, she says, that wasn’t the case.

As a result, the couple had to take on considerable financial risk to make their venture work. “When he retired, we put our entire life savings and have worked tirelessly, often with little support from the industry,” she says.

It’s fitting then, that the show caters to audience members who are looking to travel on a budget. Rather than flying from place to place and booking luxury hotels, the Everetts opt for the modest confines of an RV park and favor unpretentious local establishments. That stripped-down approach has also made the program more fun they say, allowing them to interact with everyday people and experience the countryside up close.

The attention the show is receiving is just icing on the cake, they insist. The Stevie® Award, in particular, plays a major role in helping to boost the program’s profile, says Sheree.

“It has given us higher global exposure as well as huge applause from media and travel industry personnel here in Australia,” she explains.

And its proof, she insists, of what can happen when you believe in your ideas and are willing to work through the struggles. “It’s about focus, vision, hard work and never losing sight of the big goal,” Everett says.