Picture a group of young entrepreneurs with a creative vision and combine that with a huge, empty former tank factory. That’s right: a factory hall of 5.000 square meters, with a ceiling height of up to forty feet– a gigantic hangar that used to house the production lines for war machines until it closed down a good two decades ago.

A big, empty hall, located conveniently close to the city center of Mainz, Germany, which, in turn, is just around the corner from Frankfurt. Local entrepreneurs Ralph Heinrich and Dr. Hanns Christian von Stockhausen were intrigued, while also saddened, by the city’s decision in early 2015 to end the place’s 17-year tenure as a makeshift theatre venue. The local government had used the hall for cultural events since the shutdown of the tank factory in the mid-1990’s. 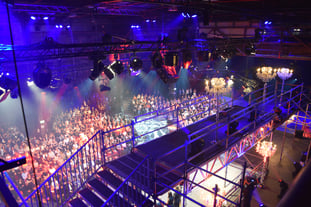 That was when the idea was born to revive the venue, formerly dubbed ‘Phoenix-Halle’, and transform it into ‘Halle 45’: a one-of-a-kind event hall and meeting place at the intersection of art, culture and entertainment.

The goal was to create a venue unlike any other, innovative and modern, versatile in size and functionality. Ralph Heinrich and Dr. Hanns Christian von Stockhausen founded Halle 45 GmbH in May 2015 and turned their vision into reality.

“The worst crime is faking it”

The story of Halle 45 GmbH, the ambitious, hard-working start-up from Mainz, Germany, is a unique one, and so is its motto: “The worst crime is faking it”, coined by grunge pioneer Kurt Cobain. Since its inception in 2015, the event management company, now a team of twelve full-time employees, has successfully hosted a huge variety of events at the venue, from concerts and art exhibitions, over indoor cinema, food and craft beer festivals, to industrial fairs and corporate events.

From the very start, the company also committed itself to opening the venue’s doors to non-profits and artists free of charge. Thus, the former tank factory has also hosted events like a “welcome celebration” for refugees and charity concerts.

The road to success

Charitable projects aside, the founding of Halle 45 GmbH depended on investors and needed to see profits. In the business of acquiring corporate clients, the start-up had to come up with a solid sales strategy.

The starting conditions were phenomenal: Halle 45 is the second biggest venue of its kind in the metropolitan Rhine-Main region, comprising the cities of Mainz, Frankfurt and Wiesbaden and a combined total of nearly 6 million inhabitants – an economically thriving area. The city of Frankfurt is known for its trade fairs and its growing financial district, while Frankfurt Airport is a major international air traffic hub – one of Europe’s biggest.

However, in order to garner your target audience’s attention, you need traction and media attention. That’s where the Stevie® Award really helped Halle 45 GmbH to turn a page in its young history. 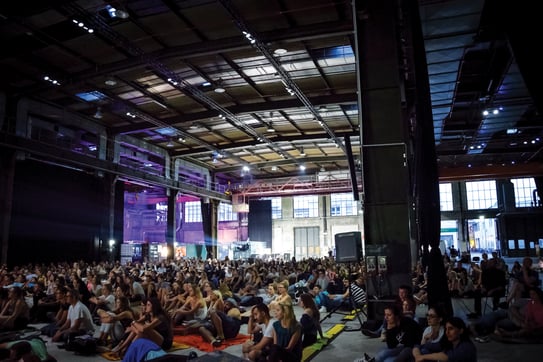