Shining a spotlight on women executives, entrepreneurs, and organizations run by women, the Stevie Awards for Women in Business announced the results of its 2013 competition on Friday, November 8. 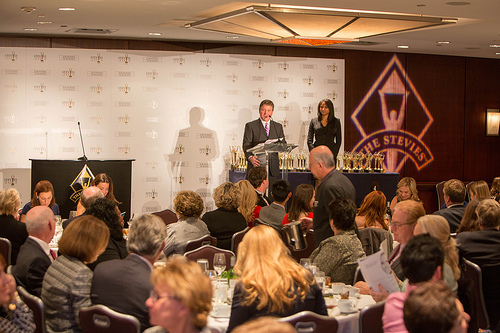 With more than 400 businesswomen and their guests in attendance, the awards were announced at a gala dinner at the Marriott Marquis Hotel in New York City.  Nations represented at the event include Australia, Canada, Germany, India, Italy, the United Arab Emirates, the United Kingdom, and the U.S.A.  The presentations were broadcast live across the U.S.A. by the Business TalkRadio Network.

More than 1,200 nominations from organizations and individuals in 16 nations were submitted to the awards this year for consideration in categories including Entrepreneur of the Year, Executive of the Year, Most Innovative Company of the Year, and Best New Company of the Year, among others.  More than 240 professionals around the world participated in the judging process to determine the Finalists and then the Gold, Silver and Bronze Stevie Award placements.

For the first time, Grand Stevie Award trophies were presented to the five organizations that submitted the best body of entries to the competition, in their own names or in the names of one or more clients.  The Grand Stevie Award winners are, in descending order:

-          Procontent Sp. z.o.o., Warsaw, Poland and their campaign on behalf of Saxo Bank Poland- Communications or PR Campaign of the Year - Reputation/Brand Management

For a complete list of Stevie Award winners and more information, visit www.StevieAwards.com/Women.

Entries for the 2014 edition of the awards will open next May.  Join the mailing list to receive the entry kit by email as soon as it's available.