Winners in the eighth annual Stevie® Awards for Sales & Customer Service, an international competition recognizing excellence in disciplines that are vital to business success, were unveiled last night at a gala ceremony in Las Vegas, Nevada attended by more than 470 executives from around the world. 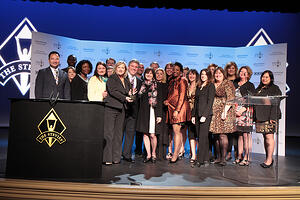 A complete list of all Gold, Silver and Bronze Stevie Awards by category is available at http://www.StevieAwards.com/Sales.

Winners in the fifth annual People’s Choice Stevie® Awards for Favorite Customer Service, as determined by more than 430,000 public votes, were also awarded at the event to organizations including CardioVet, Constant Contact, JobVite, and India’s TATA Motors Ltd., among others.

The presentations were recorded and will be broadcast by the Biz Talk Radionetworks (http://www.biztalkradio.com) at 8:00 pm ET on Wednesday, February 26.

The awards are presented by the Stevie Awards, which organizes several of the world’s leading business award shows including the prestigious International Business Awards and the new Asia-Pacific Stevie Awards.

Over 1,500 nominations from organizations of all sizes and in virtually every industry were evaluated in this year’s competition, an increase of 36% over 2013. Finalists were determined by the average scores of 129 professionals worldwide, acting as preliminary judges. Entries were considered in 43 categories for customer service and contact center achievements, including Contact Center of the Year, Award for Innovation in Customer Service, and Customer Service Department of the Year; 43 categories for sales and business development achievements, ranging from Senior Sales Executive of the Year to Sales Training or Coaching Program of the Year to Sales Department of the Year; and categories to recognize new products and services and solution providers.

More than 130 members of seven specialized judging committees determined the Gold, Silver and Bronze Stevie Award placements from among the Finalists during final judging, that took place January 27 - February 5.