The 12th Annual American Business AwardsSM announced Stevie® Award winners on Friday at its event focused on outstanding new products and services and on achievements in technology industries. 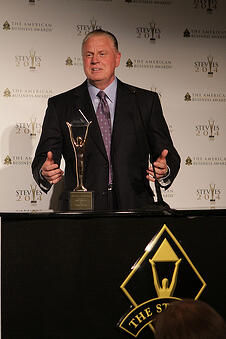 Friday’s gala was the second of two American Business Awards ceremonies this year.  The first took place in Chicago on June 13 and honored winners in disciplines such as customer service, human resources, corporate communications, live events, publications, and selected categories for company/organization, management and marketing.  Winners in all new product awards and technology-related categories were announced at the event in San Francisco on Friday.

The Grand Stevies were awarded to the organizations who received the most awards overall – Gold, Silver or Bronze – in the ABAs this year.  Quality Systems of Irvine, CA was presented with the Grand Stevie for Organization of the Year.  The winners of the other Grand Stevie Awards will be named in a followup press release today.

­   Company of the Year - Computer Software - More Than 250 Employees: Bigcommerce

­   Fastest Growing Tech Company of the Year - Up to 2,500 Employees: BrightRoll

­   Executive of the Year - Computer Software - Up to 500 Employees: Jahangir Mohammed, Founder & CEO of Jasper

­   Tech Innovation of the Year - At Organizations With Up to 100 Employees: Newlight Technologies commercial scale-up of carbon-negative plastic