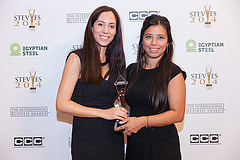 By popular demand, the Stevie Awards have announced a general entry deadline extension for its new German Stevie® Awards.  Entries will now be accepted through February 11.

All organizations operating in Germany are eligible to submit nominations to the 2015 German Stevie Awards. The awards will recognize achievements made since July 1, 2013.  Complete information about the awards process is available at www.StevieAwards.com/Deutschland.

The German Stevie Awards welcome nominations from all organizations operating in Germany – large and small, for-profit and non-profit, publicly-held and privately-held - with a wide range of categories to choose from, including

Many German companies have been recognized in Stevie Awards programs over the years, including adidas Group, Bertelsmann AG, DP DHL, Lufthansa, and Siemens AG, among the more prominent winners.  “With the German Stevie Awards, we are able to recognize the achievements of many more German companies and executives,” said Michael Gallagher, president and founder of the Stevie Awards. “This will mean that many more German businesses will be able to benefit from the brand-building and employee-recognition benefits of winning the major business award, the Stevie Award.”

Questions about the German Stevie Awards?  Contact us at help+deutschland@stevieawards.com.