The Stevie® Awards today announced Grand Stevie Award winners in The 14th Annual American Business Awards competition. Winners will be presented with their Grand Stevie trophies at the ABAs’ gala banquet on June 20 in New York.

CallidusCloud, the Dublin, CA based software developer, received the Grand Stevie for organization of the year, for earning the most award points (76) in The 2016 American Business Awards. Ot 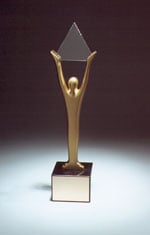 The Grand Stevie Awards were granted to the organizations that submitted the best body of entries to The American Business Awards this year, in their own name or in the names of one or more clients, with a Gold Stevie Award win counting for three points, a Silver Stevie win for two points, and a Bronze Stevie win counting for 1.5 points. The organizations with the most points won.

Besides CallidusCloud, TopSpot Internet Marketing, Merkle, and MWW, Grand Stevies were also awarded to the 10 other organizations with the most points in the 2016 competition. There were a few ties this year.  The other winners are:

Stevie Awards are conferred in five levels of distinction: Grand, Gold, Silver, Bronze, and People’s Choice. More than 400 executives and their guests are expected to attend the June 20 awards gala at New York’s Marriott Marquis Hotel.