The Stevie® Awards held one of its awards galas for its 13th annual American Business Awards competition on Friday night, and announced the winners of its Grand Stevie Award trophies. 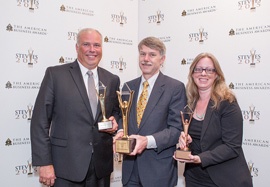 The Grand Stevie Awards were presented to the organizations that submitted the best body of entries to The American Business Awards this year, in their own name or in the names of one or more clients, with a Gold Stevie Award win counting for three points, a Silver Stevie win for two points, and a Bronze Stevie win counting for 1.5 points. The organizations with the most points won.

Besides Fareportal, C-4 Analytics, MSLGROUP, and MWW, Grand Stevies were also awarded to the 10 other organizations with the most points in the 2015 competition. There were a few ties this year which resulted in 11 members of the top 10. They are:

More than 3,300 entries were submitted to The 2015 American Business Awards and more than 200 executives nationwide participated in judging to determine this year’s Gold, Silver and Bronze Stevie Award winners.

Entries for The 2016 American Business Awards will be accepted starting in October.