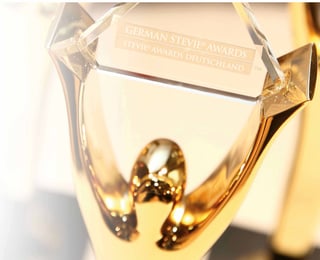 More than 50 executives from all over Germany reviewed nominations to decide who received the coveted Stevie Awards. The judges intensely reviewed entries, selected some of the most innovation solutions, and ultimately named the Gold, Silver, and Bronze Stevie Award Winners. Next to Weber Shandwick Germany, Havana Orange GmBH was the next big winner of the year. The marketing agency based in Munich won three Gold Stevie Awards as well as three Silver and Bronze.

Taking home the Stevie Award for the most innovative technology company of the year with more than 2,500 employees was ABB AG (Mannheim) and Startup of the Year was won by Consus clinic management GmbH & Co KG (Freiburg). Inventorum GmbH (Berlin) took home Retail Company of the Year.

All Stevie Award winners are listed on the German Stevie Awards homepage at http://stevieawards.com/gsa/2016-gewinner-der-german-stevie®-awards.

Winners will be presented with their awards at an awards ceremony on April 8, 2016 at Hotel Vier Jahreszeiten Kempinski in Munich..