For most people, participating in conversations and listening to music are easy to take for granted. For those with hearing impairment, these everyday activities are a major challenge.

Over the past 71 years, Phonak, which is based in Zurich, Switzerland, has been working to eliminate those hurdles for customers around the globe. After many years of dedication in the industry, the company’s achievements now include a litany of technological breakthroughs, each resulting in hearing devices that are more discreet, effective, and versatile than ever before. 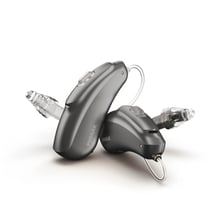 A member of the Swiss corporation Sonova Group, Phonak launched the world’s first behind-the-ear hearing aid in the early 1970s, and a few years later, they introduced the first digitally programmable hearing device. In the 1990s, Phonak developed the market’s smallest FM receiver, which paired with a wireless transmitter to minimize background noises and to enhance the clarity of individual voices.

The desire to push the boundaries of hearing technology still drives the company today, resulting in a series of high-profile accolades. Phonak recently launched Audéo B-Direct, the first hearing aid that can connect to any Bluetooth®-equipped mobile device. The product, which earned the organization a Silver Stevie Award for Best Product at The American Business Awards® this summer, automatically senses the user’s surroundings and adjusts the output to make answering phone calls and holding conversations simpler.

On the heels of that achievement, Phonak was named winner of the Gold Stevie for Best Product at The International Business Awards®. This time it was for its cutting-edge Virto B-Titanium hearing aid. Developed using custom 3-D printing, the device capitalizes on titanium’s lightweight and superior strength. The result is a hearing aid that’s virtually unnoticeable to the outside observer.

“The Stevie Awards are an extremely important achievement to us. They demonstrate our ongoing commitment to create a consistent, scalable, sustainable competitive advantage within Phonak,” says John Urbaniak, Associate Director, Media Relations US Hearing Instruments at Sonova.

The firm’s management has made research and development a top priority going forward. In April, Phonak announced a new audiological center of excellence at its audiology research center outside of Chicago, Illinois, United States. The center will serve as a hub for independent research, as well as ongoing collaborations with a network of top audiology experts and institutions around the globe.

The Swiss company is using its stature in the industry to increase awareness of hearing loss solutions. To that end, it recently partnered with a charity called Songs of Sound, which helps improve access to hearing loss testing and the technology to help correct it.

With support from sponsors like Phonak, Songs for Sound holds a free weekend retreat each year that educates families of children with hearing loss about new technologies. It also teaches them how to navigate the health care system in order to get optimal care. In addition to the camp, the partnership with Phonak helps assist the organization’s Hear the Music Project and mobile clinic tours, which provide 10,000 to 15,000 people a year with access to free hearing tests.

Phonak also works to reduce the stigma that sometimes surrounds hearing loss by leaning on successful hearing-impaired celebrities. For example, it inked a sponsorship deal with stand-up comedian D.J. Demers, a contestant on season 11 of America’s Got Talent. His performances often revolve around his experiences as a youth in need of hearing aids.

The organization also turned Swiss aerialist Jason Brügger into a brand advocate. In this role, he’s involved in a range of projects worldwide to help support those with hearing impairments. Additionally, U.S. golfer and Deaflympics gold medalist Kaylin Yost was a guest keynote speaker at Phonak-sponsored summer camps for children with hearing loss.

“With these ambassadors, we've been able to reach thousands through conferences, community outreach, and speaking opportunities,” adds Urbaniak.

In doing so, the company known for developing state-of-the-art technology has also helped hearing-impaired people heal on an emotional level, too.