Mona Andrews is many things: a California, USA, resident; an entrepreneur; and the operator of a business process outsourcing firm since the early 1990s. She notes she had the flexibility to balance the demands of raising young children, but when her kids reached preschool, she noticed other moms didn’t have that same luxury.

“Either they stayed employed and missed many of the important moments of being a mother, or they dropped out of the workforce altogether,” recalls Andrews.

Many of her female friends continued working after their first child was born, she says, but when the second son or daughter came along, the financial and emotional toll became too much. 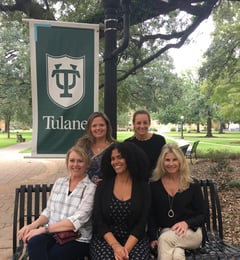 With her latest venture, Stay In The Game, she attempts to eliminate the dichotomy between being a mother and having a career. The company, launched in 2017 in Los Angeles, California, United States, offers “downshifting” opportunities, where women can work part time or remotely. This allows mothers to be home with their children either all day or at least more each day. The company also works with individual employers to reintegrate a mom into the workforce after a prolonged absence.

“As the children of these women grew, I noticed a surprising phenomenon,” says Andrews. “Over and over again, I met highly educated women who previously had important careers, and now they were telling me they wanted to get back into the workforce but didn’t know how.

The most jarring realization was their lack of confidence. They had not been in the workforce for a while and felt insecure regarding their relevance, their ability to compete, and their skill levels.”

At the same time, she noticed employers were reluctant to interview any woman who had taken an extended leave. To Andrews, this seemed a regrettable waste of talent and energy.

While society has progressively abandoned the idea of strict gender roles, women continue to sacrifice their careers for family to a much greater degree than men. A 2015 study by the Pew Research Center, for instance, found 42 percent of women reduced their work hours after the birth of a child, which compared to 28 percent of men.

Even more telling was the fact that 27 percent of women left their jobs to handle child-rearing duties, according to the Pew study. Only 10 percent of men did so.

Stay In The Game provides its services as a way for businesses to leverage the talent of experienced, skilled workers, who are often less expensive than lower-level temporary employees. Candidates work in a range of fields, from data entry and customer service to IT and accounting.

At the same time, employers can demonstrate their social responsibility by providing continuity for caregiving parents. For Andrews, the service is also a means to retain talented employees who might otherwise drop out of the workforce completely after having children.

“There will be an exponential increase in the demand employees have for remote and flexible work, and companies will be forced to change in order to successfully retain great employees,” says Andrews.

As her firm grows, she sees it as a way for more employers to manage that challenge.

“We can offer employers a solution that includes a talented, dispersed workforce,” the entrepreneur says.

Though the company is still in its infancy, Andrews says it’s not having any trouble finding female job candidates. In the case of one advertisement she placed for a remote position, she received 240 applications in just three hours.

“The demand for our service is huge,” she says.

For its innovative approach to helping skilled, professional mothers achieve greater work-life balance, Stay In The Game won two Bronze Stevie Awards at the 15th annual Stevie® Awards for Women in Business in November. It earned one for Best New Product or Service of the Year in the Business Services category and another for Start-Up of the Year.

“This has really reinforced the value of what we offer, and it shows our business concept resonates with many other people,” says Andrews.