World's Top Honors for Women Entrepreneurs, Executives, Employees, and the Organizations They Run Were Presented in New York 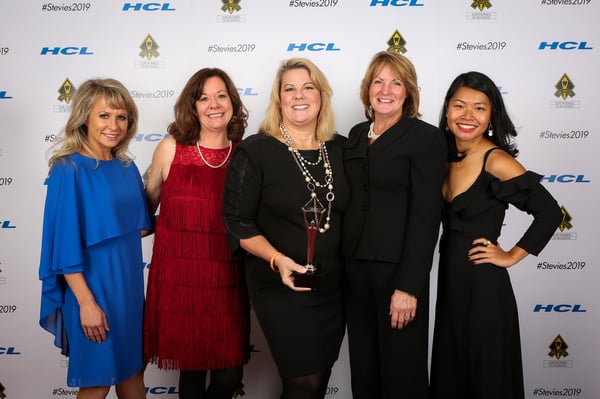 Shining a spotlight on women executives, entrepreneurs, and organizations run by women, winners in the 2019 Stevie® Awards for Women in Business were announced on Friday, November 15.

With more than 500 businesswomen and their guests in attendance, the awards were announced at a gala dinner at the New York Marriott Marquis. Nations represented at the event included Australia, Canada, Finland, Indonesia, Ireland, Israel, Switzerland, Singapore, Taiwan, United Arab Emirates, United Kingdom, and the U.S.A., among others.

The presentations were broadcast live worldwide. Photos from the event are available here.

More than 1,500 nominations from organizations and individuals around the world were submitted to the awards this year for consideration in categories including Entrepreneur of the Year, Executive of the Year, Most Innovative Company of the Year, and Startup of the Year, among others. More than 160 business professionals working in eight specialized judging committees determined the Gold, Silver, and Bronze Stevie Award winners.

HCL Technologies, the multinational information technology service and consulting company, sponsored awards in six Red Ladder Women in Technology categories. Among other notable Stevie winners in those categories are

The Stevie Awards staged the second edition of its Women|Future Conference in New York on November 14-15 in conjunction with the Stevie Awards for Women in Business. More than 150 women shared two days of programming highlighted by keynote speeches by Sheryl Connelly of the Ford Motor Company and Selena Rezvani of Be Leaderly.

Entries for the 2020 (17th) edition of the awards will open in May. The 2020 awards ceremony will be at Caesars Palace in Las Vegas, Nevada U.S.A. on Friday, November 13, with the Women|Future Conference sharing the same venue on November 12-13.

Entries for the 2020 edition of the Stevie Awards for Women in Business will open in May.