April 22: Winners in the sixth annual Asia-Pacific Stevie® Awards, the only awards program to recognize innovation in business throughout the entire Asia-Pacific region, were announced today.  The list of Gold, Silver and Bronze Stevie Award winners is available at http://Asia.StevieAwards.com. 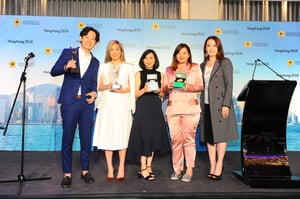 The Stevie Awards are considered to be the world's premier business awards, conferring recognition for achievement in the workplace over the past 17 years in programs such as The International Business Awards® and The American Business Awards®. The name Stevie is derived from the Greek word for "crowned".

The 2019 Asia-Pacific Stevie Awards have recognized organizations in 17 markets including Australia, mainland China, Fiji, Hong Kong, India, Indonesia, Japan, Macao, Malaysia, New Zealand, Philippines, Singapore, South Korea, Taiwan, Thailand, the U.S.A. and Vietnam. More than 900 nominations about innovative achievements in the 29-nation APAC region were considered by the judges this year in categories such as Award for Excellence in Innovation in Products & Services, Award for Innovative Management, and Award for Innovation in Corporate Websites, among many others.

Stevie winners will be presented their awards at a gala banquet at the InterContinental Hotel in Singapore on Friday, 31 May.  Tickets for the event are now on sale.

Close to 200 executives around the world participated in the judging to determine the Gold, Silver, and Bronze Stevie Award winners.

"We extend our warmest congratulations to all of this year's Gold, Silver, and Bronze Stevie Award winners and look forward to celebrating their achievements in Singapore in May," said Michael Gallagher, founder and president of the Stevie Awards.