Aiming for the Top: A Grand Stevie Awards Winner’s Path to Success 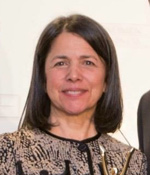 This past November, Grand Stevie Award trophies were presented for the first time in the Stevie Awards for Women in Business to the five organizations that submitted the best body of entries to the competition.  Also a first, the name at the top of that list was not for an individual or company that had been a winner: it went to Melissa Sones Consulting, which had successfully entered several of its clients in the competition.

We asked Melissa for some insight on this success.  What, for example, did she tell her clients were the most important reasons for entering a professional awards competition such as the Stevie Awards for Women in Business?

“First, I tell clients or potential clients that awards marketing is the number one form of marketing in the world,” explained Melissa. “Just look around you: car companies run TV commercials noting that they are number one on J.D. Power and Associates; others on TV say they are topping Angie’s List. There are many examples.

The Power of Awards

“Second, I tell them I have had personal experience with the power of awards. I won a major award years ago and it changed my life and brought opportunities my way that might not otherwise have come. In my experience winning awards has worked, so I encourage my clients to win awards themselves so that they can do the same for their businesses, ultimately attracting lots more business.

The Thrill of Winning

“Reason number three is the awards ceremony itself.  While I focus on the applications and the actual winning—so far, 99% of those we have entered for major business awards have won something—getting up in front of a large audience comprising a wide range of business owners is a thrill. That’s why I took a table at the 2013 Stevie Awards for Women In Business Awards and encouraged my clients to come. Four of them won Gold Stevies, and it was very exciting!

“A fourth reason is that I want my clients to have a marketing tool that they can use over and over again. Win once and you can put it out there forever. I love that, and it’s effective.

“Finally, there is the cost. As a major marketing tool for a company of any size from sole proprietor to corporation, awards marketing is extremely affordable—a big bang for your buck, as they say. Pay a very affordable fee and we work to help you win. We are also “winner spotters,” so if we believe you can win, you usually do.”

We asked Melissa what winning a Grand Award at the 2013 Stevie Awards for Women in Business had meant to her.

“I was surprised when I won!” she told us. “It meant that the focus of my company–the only awards consulting company of its kind in the U.S.—is working.”

Additionally, Melissa told us that her awards consulting company does more work with the Stevie Awards than with any other awards competitions.  As she puts it: “Everything about it makes sense for the many businesses I work with. The applications themselves allow for creativity without being too time-consuming; the team at the Stevies is available whenever I need help, such as when filing an application or following up on a trophy order; and the awards have names or titles that I happen to like from a marketing standpoint.  Winning a Women in Business Award or an American Business Award or an International Business Award appeals to my clients, most of whom have come back for more awards, with the Stevie Awards for Women In Business at the top of the list so far!

Melissa has been a professional writer her entire adult life, and running a marketing awards company incorporates that.  As she told us: “I have always done exactly what I want to do ONLY if what I want is in my Integrity, no matter what, and I continue to do that. The latter is part of Living In Integrity.”

Continued Melissa: “I also do business differently and it works! I use a tool that I share with clients and with others. Tools For Living Free is a special two-sided educational publication based on talks given by Roger B. Lane, Ph.D., the Founder/Director of Cosmos Tree, Inc., a nonprofit Educational Foundation based in New York City. The Tools For Living Free pamphlet that I most often use–and which gives me and my clients a roadmap for doing business–is titled How To Run A Business (Your Life) Spiritually.  It shows the importance of clear communication; of ‘seeing all things anew’; of letting go of any attachments to results (huge for me when it comes to new business); and the importance of handling the tasks ‘that will make a difference.’ In business, that could be tasks that move the company forward, i.e. newer, more creative options (instead of the same old same old) or something that is a service to others.”

Melissa is certainly providing a service to others, as her achievements testify.

Known for her corporate seminars on "The Art of Pitching" as it relates to lifestyle, Melissa is a former columnist for Food & Wine; the former beauty editor at Self magazine; fashion features editor (and member of the founding team) of Mirabella; fashion critic for the New York Post; and fashion editor for United Press International. She has been a regular contributor to Glamour and her pieces have appeared in The New York Times, Harper’s Bazaar, and Redbook, among others. She was also a contributor to the Zagat Guide on Shopping. She is the author of Getting into Fashion, A Career Guide (Ballantine) and Full Frontal Fashion: Never Worry Again About What To Wear (Plume/Penguin Group), which was featured in People Stylewatch, on The View, and in other national publications. She has been quoted on lifestyle in O, The Oprah Magazine and Real Simple. Her company specializes in creative thinking and knowing what's coming down the pike before others do. The New York Times featured the company’s creative approach in a 2009 article. In 2013, Melissa Sones chose to make awards and awards marketing the main focus of her company.

Melissa Sones Consulting (MSC) is an awards consulting company that helps individuals and businesses win the top national and international awards—with a special emphasis on business awards. 99% of the companies MSC has entered for a top business award have won something. If you want to win, you want to work with MSC. For more information, go to www.melissasonesconsulting.com.

Learn all about the Stevie Awards for Women in Business, the world's top honors for women entrepreneurs, executives, and organizations they run at www.StevieAwards.com/Women.