In Memoriam: The Illustrious Career of a Stevie Awards Judge

We were shocked and saddened to learn of the passing of Ir. Tony Roland Silitonga, MBM, MBA, DBAcan, a regular judge for the Stevie Awards, most recently for the 2016 Asia-Pacific Stevie Awards, His family informed us that he had passed away on April 15 after battling lung disease and diabetes, and our thoughts are with them at this time.

It also caused us to look more closely at the illustrious career of a man we had come to see as a good friend of the Stevie Awards. 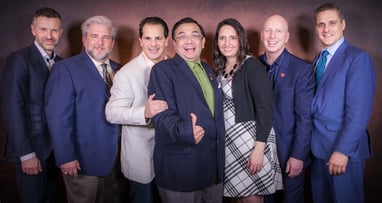 Tony was a judge who took his responsibilities seriously, and last fall he received a prize for his contribution to judging the 2015 Stevie Awards for Women in Business.  He and his wife attended our 12th annual awards dinner on Friday, November 13, 2015, in New York City, and we were honored to have met him and to have been able to thank him in person for his generous contribution to the important process of judging our Stevie Awards.

(Tony is featured in the center of the above photo. This picture was taken during his trip to the United States last October/November, and this is how we will remember him: a happy and outgoing man.)

Tony had a distinguished career: he had been on the Board of Trustees of the Indonesian Institute for Corporate Directorship since October 2012. The IICD is a not-for-profit organization founded by ten highly reputable Indonesian Business Schools and preeminent individuals.  Tony had been a lecturer to Post Graduates at universities such as De La Salle University-The Philippines, Swiss German University, Universitas Indonesia (UI), Universitas Gajah Mada (UGM), Universitas Brawijaya, and Universitas Sriwiijaya. From 2010, Tony had also been Chairman of The Board of Management of the Forestry Research Institute for Public Policy, Economic, and Community Development (FORESPECT), a Research company on Forestry Development, and Eco Green activities

Tony graduated from Bandung Institute of Technology in Petroleum Engineering. He obtained his Master in Business Management (MBM) in Finance and Strategic Management from the Asian Institute of Management, Makati, Philippines, and his MBA in finance from Columbia Business School, New York, USA.