The organizers of the Stevie Awards announced the winners in the 2018 German Stevie® Awards. The big winner overall with a total of ten Gold Stevies is Crowdconsultants 360 GmbH from Berlin.

With ten gold, one silver, and one bronze Stevie Award, Crowdconsultants 360 GmbH is the most awarded organization of the German Stevie Awards this year. The Berlin-based company can look forward to Gold Stevie Awards for most innovative company, startup of the year, and more. 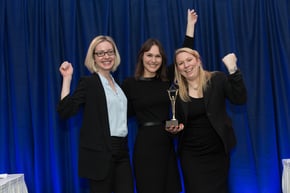 50 executives from all over Germany were named as a part of the expert judging panel who determined the Stevie Award winners. They have reviewed over 400 nominations, selected the most innovative solutions, organizations, and individuals, and finally crowned the winners of the Gold, Silver, and Bronze Stevie Awards.

Agenda Informationssysteme GmbH & Co. KG from Rosenheim and the Voith GmbH & Co. KGaA from Heidenheim each won five Gold Stevie Awards. Michael Gallagher, founder and president of the Stevie Awards, congratulates all winners on their achievements. "We are looking forward to a great award ceremony in Berlin", he says, and is proud that it takes place at the Hotel Adlon. On 27 April 2018, the winners will receive their trophies at a festive award ceremony.

All winners of the Golden, Silver and Bronze Stevie Awards are listed on the homepage of the German Stevie Awards.

Anyone wishing to be one of the winners of the German Stevie Awards next year can request an entry kit on the awards website in order to be informed in good time about deadlines and participation documents: www.stevieawards.com/Germany.