The 4th annual German Stevie Awards is now accepting entries. Companies and organizations from all industries can now enter nominations free of charge for their best projects and achievements, to compete for the coveted Stevie Awards trophies.

Early-bird entrants will benefit from a reduced winners fee until December 6, 2017. 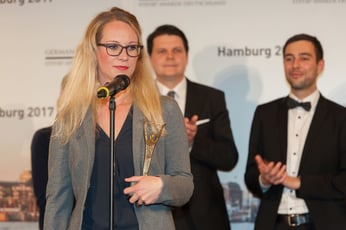 The entrants may choose from a great variety of categories, such as awards for entire companies and organizations, that honor the achievements of for profit and non-profit organizations, large and small, private and public. New at the German Stevie Awards in this year are the categories “Entrepreneur of the Year” in 34 industries as well as the title “Solo Entrepreneur of the Year”.

The entry kit and a complete overview of the categories and subcategories are available at www.StevieAwards.com/Deutschland.

There are many other categories to recognize achievement in every major business function, including product development, marketing, customer service, human resources, public relations, technology, and more.  Michael Gallagher adds: “Many categories of the German Stevie Awards also honor great achievements in the field of business-related media and publications.” This includes awards for live events, annual reports and publications, app development, videos and websites.

This year, participating organizations can expect a slightly different way to submit nominations. For the first time, the German Stevie Awards will waive the general entry fees and replace them with a special winners fee. This means that entrants can submit unlimited nominations in unlimited categories free of charge. Instead of paying an entry fee for each submitted entry, entrants will only pay a winners fee per successful nomination.  Each nomination that wins a Gold, Silver or Bronze Stevie Award will be assessed a winners fee of 400 euros. Companies submitting their nominations through the first entry deadline, December 6, 2017 will benefit from a reduced winners fee of 375 euros per winning nomination.

“We have decided to take this step to encourage more organizations to participate in the German Stevie Awards,” said Michael Gallagher. “With the new model, companies will only be charged if their nomination is recognized as a winner by the jury”

The payment of the winners fee will unlock the right to publicly claim Stevie-winner status and the winner will be listed in the official winners list. There are more benefits, including access to all judges’ comments about all of their entries and the right to receive their award on stage at the awards ceremony.

If entrants miss the December 6 entry deadline, they will still be able to submit their nominations through January 24, 2018.

On April 27, 2018, the Gold, Silver and Bronze winners will be celebrated and honored with their Stevies at a festive awards ceremony in Berlin. New this year: Each award winner will receive a trophy according to his level in Gold, Silver or Bronze. (In the past, only the Gold Stevie winner automatically received a trophy.)

A complete list of all 2017 Gold, Silver and Bronze Stevie Award winners by category is available here. For high-resolution photos of the Stevie Award trophy or the German Stevie Awards logo, visit http://stevieawards.com/gsa/photos-and-logos. We are happy to provide you with more press photos from previous winners and awards shows on request.

Learn more about the German Stevie Awards 2018 at www.StevieAwards.com/Deutschland.