Over a decade ago and before the explosion of mobile devices, Hilton Goldstein, an air flight enthusiast, combined his passion of flying with his systems architecture talents to build a software company focused on innovation and safety. He developed an app that quickly grew in sales and revenue, and Hilton Software was born.

Today, Hilton Software is responsible for a $17.5 million government contract enabling military pilots worldwide to fly paperless, saving money, fuel, time, and most importantly, safer missions. This has lead Hilton Software to win the Gold Stevie Award in The 2017 American Business Awards for Executive of the Year in Aerospace and Defense.

From Ground to Air

Dr. Goldstein’s humanitarian efforts when he flew as an Angel Pilot was the inspiration for his first app. Although only motivated for his eagerness to serve the people he flew, his path lead him to unexpected destinations. 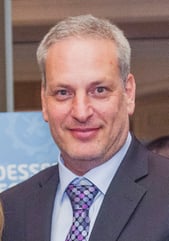 “Hilton Software’s first patent enabled airport diagrams to be very accurately geo-referenced irrespective of their runway layout, making aviation safer and avoiding runway incursions.” According to Company Representative Cristina Alvarez, “Our second patent application allows pilots to simply draw their route on the map with a finger on the mobile device, possibly deviating around water, weather, or terrain.”

Everything new is interesting and stimulating to Hilton Software. This dedication to continual innovation and commercialization has led to many patented and patent-pending technologies being introduced into their commercial products.

“We strive to be ahead of the curve or at the very least jump on top of emerging technologies and advances as they occur.”

Always Looking Beyond The Horizon

Team Hilton Software as a whole has shown a variety of interests. Seven of its members are currently advancing their higher education in different fields, while many are actively studying to pass the pilot ground test. The company’s Project Executive is currently training as a pilot and soon will be able to perform her first solo flight in her own Piper aircraft. Because everyone is highly motivated and very active, they all contribute to the company’s pervading and bustling winner’s culture.

“Hilton Software strives to reach a plateau where each person is vested, satisfied, motivated, and rewarded. It is no small feat to accept that a great workplace outweighs the expense and effort of maintaining a nurturing environment.” Alvarez concluded, “And that, in a nutshell, has greatly contributed to the company’s success.”