Where Are They Now? 2004 Stevie Awards Winner Myrna Hoffman

Myrna Hoffman is Managing Director of OOZ & OZ, an innovative optical illusion toy company, and was one of the handful of winners in the very first year of the Stevie Awards for Women in Business.  Prior to winning the Stevie for the Best New Product of the Year in 2004, she was focused on growing her small business. Hoffman’s unique products were earning national toy awards (13 top honors), and she personally had received two business honors. 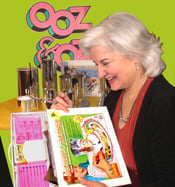 The Stevie Award was a stimulus to her business growth.  Seven months after winning the Stevie and relocating from Virginia to Seattle, Wash. USA, Hoffman rebranded and expanded both her concept and product line. Hoffman’s science-based art toys and activities -now called “Morph-O-Scopes” (shortened from the formal technical term “anamorphoscope”) currently consist of more than a dozen engaging anamorphic products and services.  Recognition within the toy sector has doubled to 25 coveted top toy awards. Universal kudos from kids, parents, educators and child development experts alike continue to flow in.

After Hoffman produced her first anamorphic party activities, a friend asked her to create a special set to keep her young daughter entertained on their long transoceanic flight. That request became the genesis of Hoffman’s first Mirror-aculous Circus Art Activities Kit.  The child, now in her 20s, recently went to work for Spark Publications and learned that her new boss, too, was a Stevie Award recipient.  This further cemented the level of respect given to the Stevie for Hoffman.

“The awareness of the Stevie Awards for Women in Business program is spreading.  I am honored to have been recognized for my company’s creativity and was intrigued to find out that my when my friend’s daughter (who knew I had won a Stevie) entered the workforce, she began working for another Stevie Award recipient.  This increasingly popular platform is helping take women in business further and creating more opportunities for acknowledgement of their efforts.”

The entry deadline for the 2013 edition of the Stevie Awards for Women in Business is August 28.  Learn how to submit your nominations at www.StevieAwards.com/Women.