Suzanne McDonald is CEO of Designated Editor in Newport, Rhode Island, USA and winner of the Gold Stevie® Award for Upstart of the Year in the management awards categories of The 2014 American Business Awards, the top business awards program in the USA. 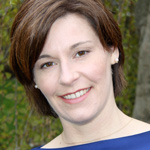 (Join the mailing list for the 2015 ABAs and you'll be emailed the entry kit as soon as entries open again in October.)

We asked Suzanne McDonald to explain how she came to found her company. “When I started in the Social Media business, I had been a successful journalist. By 2006, with the looming end of print as we knew it in the form of magazines and newspapers, it was clear to me that print would ultimately coalescence with New Media. Even though it was early days for this trend, I chose to jump the journalism ship and set a course for the new world of Social Media, which is where I believed the future of journalism lay.

“Since then, I have become an expert in New Media—the area of marketing information, rather than brands themselves—that includes every aspect of social media, plus everything that is crucial to have a powerful and fully integrated marketing platform and results. This can include face-to-face networking or it can include branding. It all depends on the client.”

Bringing Social Media to Educators
Suzanne explained how she had started providing services in New Media to universities. “In the past year I have become one of the national leaders in the movement to bring social media—really New Media—into university settings. I have spearheaded this movement because I saw—and still see—what happens when young people use Facebook and Twitter and Pinterest and Instagram, but have no idea how to use these tools cohesively to become useful, usable, and effective in a business setting.”

Continues Suzanne: “I believe students must learn these key tools in college and/or graduate school, and then bring their tool-based skills and strategic know-how to the workplace. Doing this, I believe, will make finding jobs a lot easier. There’s nothing like results to prove your value in the workplace, big or small, and today’s metrics-linked communications and marketing makes this entirely doable.”

1. The Campaign Counts.  Whether you are a giant global company or a college student or administrator, you must build a comprehensive and consistent focus for your social media/New Media work—and that focus needs to be a “direct hit” with your target audience.

2. Know your Target Audience.  Believe it or not, most companies—no matter their size—haven’t taken the time to pinpoint their actual target audience. Do it! An often-seen example: Your audience is B-to-B and you are posting some or all C-to-B.

3. Share Cautiously. The number-one problem in the world of New Media—whether you are a business executive or a student learning the New Media ropes—is oversharing. If you are putting out too much information, some of it will ultimately be detrimental to your image or your cause. And once it’s up, it can be difficult to remove (although this is one of the fastest-growing areas in New Media jobs). If you’re not sure what to post and when, get the expert advice you need first.

4. Ask Yourself: “Are We Boring our Audience?” This may seem like part of the two items above, but in the world of New Media, it very much stands alone. Avoid putting information online that is not of interest to your target audiences. Do that and you risk losing them. Example: Many companies I work with pack their online arenas with press releases that few people care about. My constant advice: Revise those press releases to resonate with your target audiences.

5. Be Smart about SEO.  As noted above, before you post online, make sure that the post is a perfect fit for your target audience. Avoid posting just for search engines (e.g. the press releases). Have a perfect fit first. Then, if you get great SEO to boot, even better.

6. Know Where to Find Your Audience! Yes, you’ve already segmented your key target audiences, but after doing a nice job, you’ve fallen into the next big New Media trap: you’ve forgotten to find out WHERE your audience exists online. Example: Your audience is primarily female, and you really need to be on Pinterest (largely female) but you’re on only Facebook.

7. Know Your Metrics—and Metric Tools.  Are you analyzing what you have done so far and seeing where you succeeded and where you need to refocus or retool? Example: A participant in one highly successful university-based project I ran used Google and Twitter to analyze the results of a campaign and came up with very little. I stepped in and instead compared them to similar campaigns at other universities and— guess what—they came up near the top, which is where they belonged.

9. Build New Media Relationships. This is an adjunct of the item above, but it also stands on its own as a key aspect of New Media: build relationships with your top influencers and stick with it until you get New Media placements.

10. Be Pitch Perfect! Where do I see companies and university students/administrators miss the mark most often? Call it “off-pitching.” Example: You’ve found an influential fitness blogger who is vegan, and yes, he or she reaches millions—but you work for a snack food company. Don’t pitch that blogger. Instead, look for influencers who are a perfect match for your product or idea or point of view. One “off-pitch,” and the influencers may never work with you again.

According to Suzanne, these suggestions should be looked on as a tune-up for businesses and university leaders. As she puts it: “Be sure to get the help you need, even if you are working with an agency. You need to know all relevant aspects of New Media, and it is sometimes the case that so-called ‘experts’ give you what they know, not what you need to learn.”

Suzanne’s conclusion: “Whatever it is, take the time to learn the fundamentals in order to be able to ask good questions!”

About Suzanne McDonald
Suzanne McDonald is a revolutionary in New Media who started her company, Designated Editor, with the express purpose of educating clients on every aspect of New Media. This includes social media from Google+ to Twitter, as well as WordPress, blogger outreach/strategy, fully integrated marketing, and face-to-face events/networking.

McDonald’s objective is to combine all New Media into a consistent whole, and to do it affordably and thoroughly. By so doing, she has become the leading purveyor of New Media expertise in New England. McDonald's "techie" forum in Newport, Rhode Island, reaches nearly 1,000 business leaders, and her business has doubled in size each year since it began.