Freelancer is the world's largest freelancing and crowdsourcing marketplace by number of users and projects.  The company recently won two People’s Choice Stevie Awards for Favorite Companies in the 13th Annual International Business Awards. We got a chance to talk to Sebastián Siseles, the International Director of Freelancer about how the group connected with the Stevie Awards years ago and how they’ve seen the value of winning .

The 2017 International Business Awards opens for nominations on February 1. Request your entry kit here and it will be emailed to you as soon as it's available. 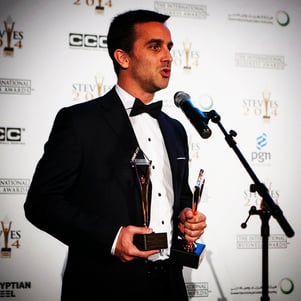 Sebastián remembers when they, “became acquainted with the Stevies back in 2012, when a well-known media outlet announced the winners of the IBAs. We were convinced right away of its importance as it recognizes the achievements of the world's most important organizations and its leaders. The following year, in 2013, we decided we were ready to apply to the awards as Freelancer.com had grown to be an outstanding company. That same year we were honored with our first Stevie Award.”

Freelancer.com has become a staple in connecting employers and freelancers to do work together 24/7 across the globe. Sebastián relayed that, “Freelancer.com is the world's largest freelancing and crowdsourcing marketplace by number of users and projects. We connect over 23 million employers and freelancers globally from over 247 countries, regions and territories. Through our marketplace, employers can hire freelancers to do work in over 900 areas such as software development, writing, data entry and design right through to engineering, the sciences, sales and marketing, accounting and legal services.

Sebastián stressed the importance of their vision, which is providing jobs and changing the lives of at least one billion people all over the world. For example, in the Philippines, Freelancer.com partnered with the government's Department of Science and Technology to extend online freelancing opportunities to Filipinos in rural areas with limited employment options.

Sebastián continues that they also have, “an ongoing partnership with the Malaysian government’s Multimedia Development Corporation, which provides education for Malaysia’s B40 communities.”

Recently, the company concluded its first round of the Train-the-Trainers program, which educated fifty (50) trainers who will be deployed across Malaysia to help underprivileged Malaysians find online work.

Freelancer.com has been a global success, Sebastián reflects on their first nomination:

“At the time of the nomination, Freelancer.com hit the 15 million users milestone and we wanted to acknowledge our community by putting together an e-book: https://issuu.com/freelancercom/docs/15mm_ebook

Sebastián also notes the significance of winning a Stevie:

“Receiving an award is always an honour for Freelancer.com. It also serves as recognition for the team for all the hard work. We always try to be part of the amazing Stevies Gala and the chance of networking while being there is just awesome.”

“Our community celebrates with us whenever we share the news with them and this seems to further boost their trust on the marketplace. They are always deeply informed about the nominations and always eager to cast their votes for us,” Sebastián adds.

Sebastián highlights the results from winning a Stevie:

“Freelancer.com has gained a lot of exposure due to the awards that we were honored with in the past three  years which led to an increase in user acquisition. With each award, we have reinforced our leadership in the freelancing market, especially with the People´s Choice Awards.”

"Here are links to press releases on our Stevie Awards since 2015":

Freelance work is growing exponentially. Sebastián reports their findings in this growing sector:

“Expanding opportunities for entrepreneurship and jobseekers’ preferences are driving changes in the online freelancing and crowdsourcing industry. And as seen in our growing number of users from around the world (currently at 23 million), more and more businesses and entrepreneurs are hiring freelancers online and a growing number of skilled professionals are providing services in their fields of expertise.

Sebastián details their industry highlights in, “seeing more employers from small businesses to major companies now collaborating with freelancers through crowdsourcing. An example of this  is  NASA’s partnership with Freelancer. Not only are they crowdsourcing the best ideas through a contest on Freelancer.com, they are putting together a virtual team of freelancers from around the world through remote collaboration. For example, they will hire a graphic designer from Latin America, a web developer from Asia, and  an internet marketer from North America.  These freelancers are working together as a team despite their locations. This is why we are continuously looking for ways to equip our community based on how their needs are evolving.”

Lastly, we asked if there is an inspirational story related to Freelancer.com that might appeal to our blog readers. Sebastian shared their 15 million users e-book that contains stories of how Freelancer.com helped change the lives of our users: https://issuu.com/freelancercom/docs/15mm_ebook

Here are recent stories from Freelancer in the Philippines: