The Stevie Awards have a made a significant multi-year financial contribution to the Center for Innovation and Entrepreneurship in the School of Business at George Mason University, the largest public university in the State of Virginia in the USA.

Michael Gallagher, Stevie Awards president and a 1994 MBA graduate of the university, has been actively involved with Mason for more than 20 years. So much so that he was honored with the university’s 2015 Alumni Service Award. 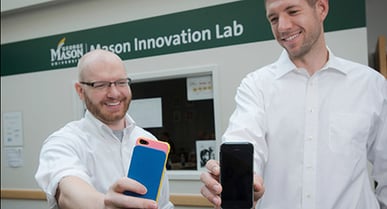 Gallagher regularly contributes time and money to the School of Business’ annual Deans’ Business Plan Competition and often serves as a mentor to student entrepreneurs.

Still, he wanted to do more.

Center for Innovation and Entrepreneurship

“It’s important to ask people face-to-face to do something because it’s hard for them to say no,” explained Gallagher. That’s what happened to him when asked to be involved with Mason, and he’s had “a lot of fun doing it.”

Having already volunteered much of his time and financially supported several of the entrepreneurial activities the School of Business offered, Gallagher saw a natural alignment with his interests and the school’s Center for Innovation and Entrepreneurship.

He learned through a conversation with David Miller, director of Mason’s Center for Innovation and Entrepreneurship, that the center didn’t lack for ideas and projects, it lacked time to properly run and grow the initiatives already created. Gallagher immediately pledged that the Stevie Awards would contribute $195,000 to give the center the gift of time, which comes in the form of a program manager that will help run the center’s programs.

“Entrepreneurs are the babies of the business world. If people don’t have babies there won’t be much of a human race,” he continued. “The same is true for the economy. If you don’t have entrepreneurs, you won’t have economic and job growth.”

With current opportunities for students ranging from field trips, mentor programs, a maker space, business plan competition, an innovation lab, student support groups, and more, Miller found it challenging to provide each initiative the attention it needed to fully serve students. The new program manager funded by the Stevie Awards will be fully dedicated to expanding and resourcing existing opportunities.

This will provide Miller more time to nurture student entrepreneurs and hopefully, increase their success.

“If you have 100 entrepreneurs, maybe one will be successful. That’s the reality of entrepreneurship. I’d like that to be five or six at Mason,” said Gallagher

“Everyone has an expertise in something, and I would like to see Mason, and the USA as a whole, to encourage people to start their own businesses. You don’t have to be Mark Zuckerberg or Sergey Brin. You just need to support yourself and be able to look at yourself in the mirror. You can be a company of one.”

Learn more about Mason’s Center for Innovation and Entrepreneurship or contribute to its success by making a gift.