Marc Wileman might be known for making slime and firing rockets before crowds of excited children. But for “Mad” Marc, as his young audience members like to call him, it’s not just about creating a spectacle. The real goal is changing the way school kids feel about science.

Since founding Sublime Science nine years ago, his Leicester-based company has become one of the most popular birthday party and event companies in England, reaching more than a million youths.

The shows are part exhibition—think smoke ring blowers and lightning experiments—and part hands-on laboratory for the kids. Participants may find themselves turning everyday ingredients into a sweet confection or learning about physics through a wild “tornado race.” 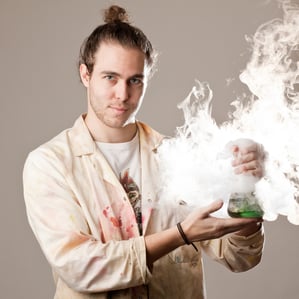 According to Wileman, a safety-first mentality in the U.K. has gone a step too far, in many cases keeping younger students from having a more personal encounter with science.

“Children today aren't even allowed to do their own science experiments and wind up thinking science is just theory,” says the entrepreneur, whose firm recently earned the Gold Stevie® Award in The 2017 International Business Awards for Company of the Year in the Consumer Services segment.

If anyone can appreciate the importance of an early love for science, it’s Wileman. His passion started when he read the novel George’s Marvellous Medicine by Roald Dahl in primary school. By age eight, he was performing experiments on his own.

Years later, he went on to study science at the University of Toronto and later at the University of Nottingham in the U.K., where he earned a First Class Master’s Degree in physics. Upon graduation, he found himself working for an Australian education organization, teaching kids all over New South Wales about physics from the back of a pickup truck.

Soon the recent grad, then just 22 years old, was thinking about building a similar program in his native England. However, despite his passion for science and education, he admits being short on business experience—and money.

“I founded Sublime Science on personal credit cards and a £1,750 loan from the Prince's Trust,” he says. “I had to move back to my parents' house and run the entire company, as well as storage and sleeping, out of one room.”

Those challenges aside, it became clear early on that Wileman had a winning formula. “Thankfully, the children loved the experiments and word-of-mouth began to spread,” he recalls.

In time, he obtained the capital his fledgling business needed, thanks in no small part to a pitch on the BBC show, Dragons’ Den. Through the appearance, he garnered an investment from two of the “dragons,” enabling Wileman to take the company to a new level.

Since then, he has put on countless birthday parties and school workshops throughout the U.K. and has grown his staff to eight employees.

“We create unforgettable experiences and sneak in the learning when the children are having too much fun to notice,” he says.

Wileman has even written a book, Don’t Eat Your Slime, that shows kids how to conduct their own experiments at home, like how to make bubbling volcanoes and create a musical instrument.

As a result of his efforts, Sublime Science has amassed a litany of plaudits, including the Queen's Award for Enterprise and a Great British Entrepreneur Award for Best Service Business. The firm even received a congratulatory letter from 10 Downing Street, home of Britain’s prime minister.

In October, the organization added the Gold Stevie Award, presented during a gala in Barcelona, Spain, to that illustrious list.

“It’s been an awesome boost for the team and a great way to spread the word about managing to reach one million kids,” Wileman says.

We are pleased to announce that video clips from the first of two award galas celebrating The 2012 (10th Annual) American Business Awards, the premier business awards program in the U.S.A. are now available to view on YouTube. (The second gala honoring the tech awards categories will be held on Monday, September 17 at the Julia Morgan Ballroom in San Francisco. Click here to order tickets.)

Our American Business Awards video clips from June 18th showcase business award acceptance speeches made by individuals and organizations from around the country, including:

Kenny Rosenblatt of Arkadium, Winner of the Gold Stevie® Award for Executive of the Year - Media
Kenny's speech started the night off by recognizing the team effort behind all individual awards.

MWW Group, Winner of the Gold Stevie® Award for Marketing Campaign of the Year - Transportation
MWW Group's Account Supervisor for Corporate Communications graciously accepts the award and thanks his colleagues and partners.

Russell Sarder of NetCom, Winner of the Gold Stevie® Award for Executive of the Year - Diversified Services
Russell's speech reminded the audience that the American Dream is still possible through hard work and determination.

Lisa Tener, Winner of the Gold Stevie® Award for Marketer of the Year
Lisa's humble speech brought to light the importance of her clients and team members.

Want to see more from the June 18th celebration? Watch all acceptance speeches and view photos from the event.