Atomic 212° in Sydney, Australia, won a number of awards in the 2016 Asia-Pacific Stevie® Awards, including a Gold Stevie for Most Innovative Advertising or Marketing Agency of the Year in the Marketing Awards Categories, and for Innovation in the Use of Events in the Corporate Communications Awards Categories with their campaign “Lucy The Robot.”

We talked with Jason Dooris, chief executive of this young and rapidly-growing agency. 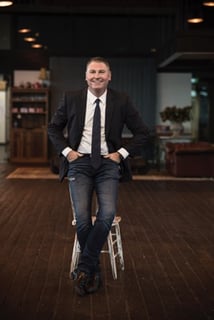 Atomic 212° is an independent, technology-driven, full service marketing agency, which opened in 2014. In just two years, revenue has grown from a base of $20m to $180m. According to Jason: “We have worked hard to grow and we love what we do.”

We asked Jason about how winning the Stevie® Awards would contribute to his company’s success. His response: “We were proud to have been so successful in the Asia-Pacific Stevie® Awards program with 13 gongs under our belt. These results position us as a market leader with a competitive edge.”

He added: “Winning these Awards falls within the amazing Atomic awards Hall of Fame for 2015–2016. Overall this has enabled the agency to position itself as a market leader in media, content, creative, public relations, and beyond.”

We asked Jason how he had coped with such rapid growth.  He told us: “While our growth has been rapid, we always had strong processes in place and had positioned ourselves for rapid growth from the outset. Our targets may have been incredibly ambitious, but when we achieved them, we had the right systems and staff in place to support this expansion.”

When asked what his plans were for the future, Jason replied: “We have a number of plans for 2017 that we are currently working on … but you will have to wait and see.  Watch this space: we expect 2017 to be an even bigger year!”

Lucy The Robot - A Viral Campaign

Double Robotics, a technology company based in Burlingame, California, USA, wanted to launch their robot in Australia. A user can maneuver it from the comfort of their home or office.

The objectives were to launch the Double Telepresence Robot in the Australian and Asian markets; and to support existing North American, French, and UK activity

Awareness was nil. Where normally this would be considered a disadvantage, the team at Atomic 212° decided to turn this to their advantage by tapping into the fact that customers had no preconceptions of robots. The territory of robots therefore presented a wonderful opportunity to engender the imagination and interest of customers. Budget constraints meant that something extraordinary was required.

Atomic 212° recognized the need to create an engaging story and ignite the imagination. The robot needed personality. The agency also needed a launch platform that would cost almost nothing, providing powerful and positive value to everyone’s experience. Some would say this was asking the impossible.

The idea was to seek out and identify a positive, almost fanatical world event of such significance that the eyes of customers and media would be focused on it.  It was also necessary to give the robot personality, drive massive user-generated content, and—more importantly—drive media-generated content.

Atomic 212° identified the launch of the iPhone 6s as the ideal platform and developed an idea adding relevance and entertainment to those fixated on the event.

The agency focused on Lucy Kelly, the girl behind the device. She was positioned as a young, energetic, innovative woman who did not want to stand in the wind and torrential rain. The humanoid robot was placed outside the George Street Apple store in Sydney to line up for the global release of the iPhone 6s. It queued for days and interacted almost constantly with Apple fanatics, the media, and people passing by.

With Sydney being the first Apple store to release the 6s globally, Lucy The Robot ended up being the first person—droid or human—to buy the iPhone 6s. The story was: Robot Buys First iPhone 6s in the World.

The campaign was driven by PR, branded content marketing, and social media. A number of mainstream publications were targeted, such as news.com.au and The Australian, along with popular television programs like The Project, and well-known technology websites like Mashable.

Phase two came after the mainstream phase. The agency used the hype to target business titles and programs regarding the practical uses of the Double Robotics device in the workplace. A microsite was developed to support lead generation and sales.

“The result represents a new record for a genuine viral marketing campaign both in terms of speed and reach,” according to Fabiano Destri Lobo of the Global Mobile Marketing Association.

The story was covered in some 4,000 news items across print and broadcast—including The Australian, Gizmodo, BRW, Seven News, Nine News, The AFR, and Mashable. Globally, it was translated into 32 languages, reaching 123 million people in total. The estimated media value was $73.2 million.

As an added benefit, the Apple store PR team invited the robot to be part of its own marketing effort.

The results were remarkable by both Australian and global standards and, according to the Mobile Marketing Association, set new benchmarks for viral media campaigns.

On the Cutting Edge

When we asked Jason what he most enjoyed about his work at Atomic 212°, he replied: “Where to begin? The agency is at the cutting edge crossroads of innovation and technology. When guests walk through our offices, they are blown away by the level of energy and amount of technology: robots and holograms … you name it.”

Jason Dooris is the CEO and Founder of Atomic 212°.  Starting his career in London in 1995, Jason’s experience is rare in that it includes media, creative, and management consulting. Over the past 20 years, Jason has held a variety of senior local and global industry positions, including CEO MediaCom UK, Deputy CEO MediaCom Europe, GM Saatchi & Saatchi NZ, GM Ogilvy & Mather Australia, GM Dentsu Australia, and Consulting Practice Director Deloitte Asia.

Jason is well known in the industry for his firm stance on transparency and integrity within the media community and he is active on the speaker circuit. Particular areas of interest include brand reinvention, the performance and accountability of media, and behavioral psychology. Jason’s strategic leadership is reflected in the depth and range of professional awards, which include 2016 Adnews Agency of the Year, B&T Agency of the Year, Interactive Agency of the Year, Gold Lion Cannes, Cyber Lions Cannes, Deloitte Tech 50 2015, BRW Fast100 2015, and many more.

Personal interests include travel, the beach, rugby, his wife Marisa, and his three lovely children.

Atomic 212° started out in 2007 as Atomic Search, a performance media-buying agency and data-driven search specialist. The business has since transformed into Atomic 212°.

Atomic is the only full service business in Australia to have started out as a search specialist, and accountability and performance lie at the core of everything the agency does. It is also the largest independent communications agency in Australia, with offices in Sydney, Melbourne, Newcastle, Auckland, and San Francisco. For more information go to http://atomic212.com.au/