Winners in the third annual Asia-Pacific Stevie® Awards, the only awards program to recognize innovation in business throughout the entire Asia-Pacific region, were announced today.  The list of Gold, Silver and Bronze Stevie Award winners is available at http://Asia.StevieAwards.com. 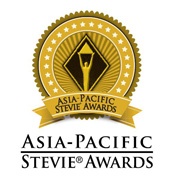 Stevie winners will be presented their awards at a gala banquet at Westin Sydney Hotel in Sydney, Australia on Friday, 27 May.  Tickets for the event are now on sale.